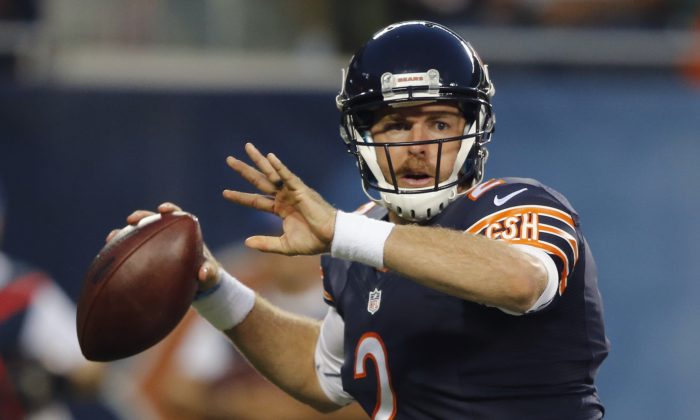 Chicago Bears quarterback Jordan Palmer prepares to throw a pass during the first half of an NFL preseason football game against the Philadelphia Eagles on Friday, Aug. 8, 2014, in Chicago. (AP Photo/Charles Rex Arbogast)
Asia & Pacific

The NFL preseason week 2 is underway.  The New England Patriots will play the Philadelphia Eagles at 7:30 p.m. ET, and the Tennessee Titans will play the New Orleans Saints at 8 p.m.

Here’s the AP update for the game:

CHICAGO (AP) — Jared Allen can see it all coming together for the Chicago Bears and their defense.

Now, all he needs to do is get on the field.

The five-time Pro Bowl defensive end anticipates suiting up for the first time with the Bears when they host the Jacksonville Jaguars on Thursday.

Assuming he plays this week, it will provide the first glimpse at a rebuilt defense that the Bears are counting on to make a playoff run functions with its new star.

The Bears made a bunch of big moves after their defense struggled last season on the way to an 8-8 record, none bigger than signing Allen away from Minnesota.

With him now anchoring the line, Chicago believes it is poised for a run at the playoffs after missing out for the sixth time in seven years.

All 11 starters are back on an offense that ranked among the NFL’s most prolific last season, the first under coach Marc Trestman.

If the Bears are going to make the playoffs, they’ll need more from their defense after it ranked among the worst in the league — and in franchise history — a year ago.

That starts up front. More to the point, it starts with Allen, who was back practicing this week.

He comes to Chicago with 128½ sacks and the task of not only igniting the dormant pass rush, but helping breathe life into the run defense.

More than anything, the Bears believe that a beefed-up line that features Allen as well as LaMarr Houston and Jeremiah Ratliff will ease the load on other areas of the defense, one that got bogged down by injuries and several misplays last season.

That group looked pretty good in last week’s win against Philadelphia even without Allen.

The Bears rattled Nick Foles in the early going, pressuring him and intercepting him twice.

This time, they’ll be going against Chad Henne at quarterback in the first two quarters, with Jaguars coach Gus Bradley saying he’s leaning toward giving rookie Blake Bortles the whole second half.

Bortles, the No. 3 pick in the draft, put up more impressive numbers than Henne last week against Tampa Bay, completing 7 of 11 passes for 117 yards. They would have been better had receivers not dropped three of his passes.

Henne, who was 4 of 7 for 30 yards against the Buccaneers, praised the rookie. He was particularly impressed with Bortles’ demeanor, saying, “He went to the right places with the football, got the coverages for the plays and executed well. He put the ball on point, and I thought he was a really good decision-maker out there and moved the chains.”

For Chicago, quarterbacks are also a story line with Jimmy Clausen and Jordan Palmer competing for the backup spot.

Coach Marc Trestman said Clausen will get the first call once Jay Cutler leaves the game and that Palmer will be the second man in relief — a flip from the preseason opener.

Both candidates for the No. 2 job had some good moments in last week’s win over Philadelphia, with Palmer overcoming an interception to throw for 104 yards and a touchdown. Clausen threw for 150 and two scores after starting the third quarter.

“They’re both making plays. They’re competing,” Trestman said. “I’ve talked to both of them that nothing’s set in stone from last week. We grade them every day. We’re watching all the tape. We’re making the corrections with each of them. It’s still a competition, and they know it.”