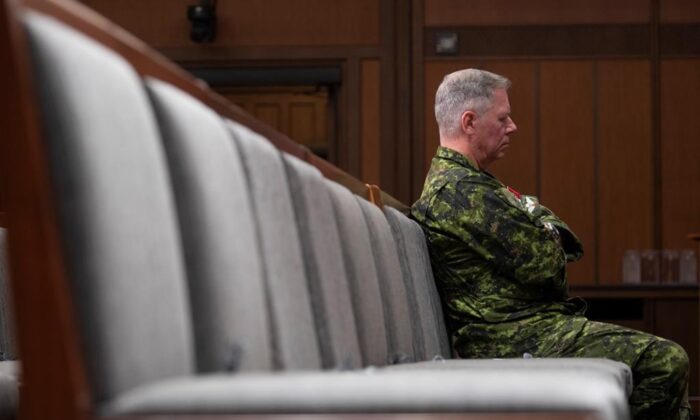 Chief of Defence Staff Jonathan Vance sits in the front row during a news conference on June 26, 2020 in Ottawa. The federal Liberal government is reportedly racing against the clock to name a new commander of the Canadian Armed Forces, with some observers worrying a delay could leave the military in limbo in the event of an election. (The Canadian Press/Adrian Wyld)
Canada

Next Defence Chief Will Signal Liberals’ Priorities for the Military

OTTAWA—Time is running out for the federal Liberal government to name a new commander of the Canadian Armed Forces before it faces a confidence vote, with some observers worrying a delay could leave the military in limbo in the event of an election.

Yet exactly who will be selected to succeed Gen. Jonathan Vance as chief of the defence staff remains a mystery because while there may be one seemingly obvious choice, there are others who might suit the Liberals better.

“There’s a generalized understanding that any of the individuals who have made it to three stars have demonstrated a pretty strong portfolio in terms of competencies and strengths,” said Canadian Forces College professor Alan Okros.

“It then becomes an issue about where does the priority fall?”

The Liberal government has quietly indicated it wants to announce the new chief of defence staff before the speech from the throne on Sept. 23. Sources at the Department of National Defence, who are not authorized to discuss the search publicly, said interviews were conducted this past week

Retired lieutenant−general Guy Thibault, who previously served as vice−chief of the defence staff, is one of those hoping for an announcement before a possible election.

“You just don’t want to have a chief in waiting with a chief caretaker in place,” said Thibault, who now heads the Conference of Defence Associations Institute.

The former Ottawa police officer who re−enrolled in the Forces after 9/11 spent years in the field before becoming commander of Canada’s special forces in 2014, at a time when the elite soldiers were in Iraq and elsewhere.

Rouleau has since been burnishing his credentials in Ottawa, first as commander of the Canadian Joint Operations Command, which oversees all domestic and foreign operations, before recently taking over as Vance’s second−in−command.

“I think Mike is really the full−meal deal of all the current three−stars,” said Thibault, echoing an assessment shared by many defence insiders and observers.

Rouleau’s appointment would signal a continuation of the current path set by Vance’s five−year tenure—the longest in modern Canadian history—and enshrined in the Liberals’ defence policy.

That policy—known as Strong, Secure, Engaged—released in 2017 promised massive billions of dollars in investments over the next 20 years for more troops, new equipment such as warships and jets, and new capabilities in cyber and space.

They, along with Lt.−Gen. Christopher Coates, who recently moved into Rouleau’s old job as head of the Canadian Joint Operations Command, would bring their own skills and styles, but they are also viewed as largely similar in terms of continuity.

Vice−Admiral Darren Hawco was one of the key architects of the defence policy, with insiders speaking in glowing terms of the way the former frigate commander managed the backroom battles that led to its development.

That included managing the priorities of the Air Force, Army, and Navy against a set pot of money—an experience that would be especially important if the government wanted to start cutting.

Many have wondered whether the Liberals will appoint a woman to become Canada’s top military officer for the first time.

Such a move would fit with the Liberals’ progressive, feminist credentials.

That is where the first two female lieutenant−generals in Canada’s history—Christine Whitecross and Francis Allen—come up.

Whitecross in particular has been seen as a potential contender for the chief of the defence staff position for years, and the fact she spearheaded the military’s fight against sexual misconduct in the early going could be a feather in her cap.

Yet neither Whitecross nor Allen have much experience in the field and Perry said having a chief of the defence staff who didn’t command a warship, fly an aircraft, or lead soldiers in the field would be almost as groundbreaking as appointing a woman.

Whichever way the government goes, says Thibault, “all of the three−stars currently in the mix wouldn’t be where they are if they didn’t have very significant experience and credibility and knowledge and skills and the right leadership qualities.”