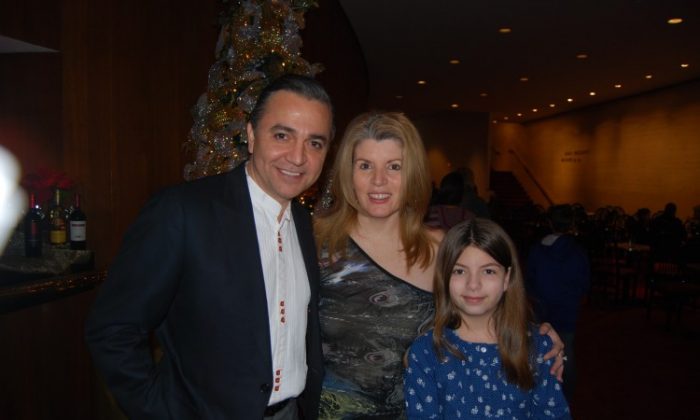 HOUSTON—News anchor and journalist Martin Berlanga said he was pleasantly surprised with the integrity of the Shen Yun Performing Arts artists at the Dec. 30 matinee in Houston at Jones Hall for the Performing Arts.

“I think it’s important for the artists to express their concerns, the things that have to change in their own country, and I think dance is a very good way to express [it]—to say that we have to make changes in the political situation like what’s happening in China,” said Mr. Berlanga, who attended the performance with Mrs. Rosario Berlanga, also a news anchor and journalist, and their young daughter.

Mr. Berlanga is a renowned journalist of Spanish media for 25 years in the United States, and has worked at the head of Univision News. He has covered many important political issues for the Spanish-speaking audience and was the first to use an interactive whiteboard to explain the presidential elections of 2008.

“The fact that they were at a certain point protesting about the injustice in China is a good thing, it shows the lack of compromise of the artist[s],” said Mr. Berlanga.

The New York-based company’s mission is to revive the 5,000 years of Chinese culture through traditional Chinese arts, which are unfortunately unable to be expressed in China today, according to the performances emcees.

“I think they are doing it in a very polite, and at the same time, a very strong way,” said Mr. Berlanga. “It’s a very smart, very clever way to say it.”

“It’s a way to learn through the dancing, about the Chinese culture, the stories. It’s amazing,” Mr. Berlanga said.

Shen Yun tells stories from every era of China’s history, from the rise of the first dynasty to issues in China today, through classical Chinese dance, ethnic and folk dances, bel canto style vocalists, and an orchestra that blends traditional Chinese instruments with a western philharmonic orchestra.

“It looks like the dancers are floating on the floor. It’s amazing,” Mr. Berlanga said. “The use of colors, and movement, the choreography was amazing.”

“We are Mexicans, we were comparing the Mexican culture with the Chinese culture,” Mr. Berlanga said. “To give my daughter the chance to be exposed to different cultures is a great advantage.”