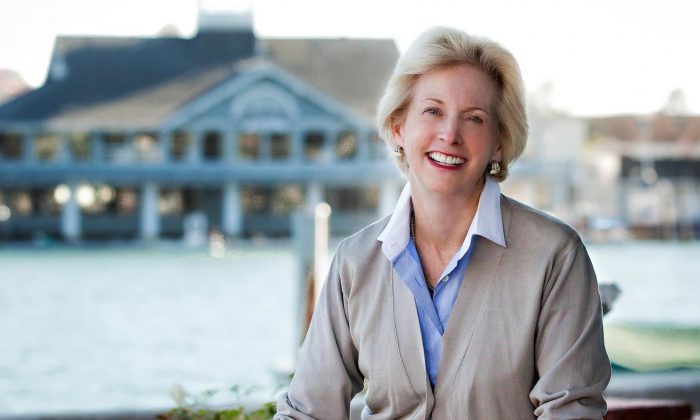 One of the five flipped seats was the 74th Assembly district, formerly represented by Republican Matthew Harper, who had held the seat since 2014. The district covers much of Orange County, including Costa Mesa, Laguna Beach, Laguna Woods, Newport Beach, parts of Huntington Beach and Irvine. Harper’s Democratic opponent, Cottie Petrie-Norris, defeated him by 4.6 percentage points in a district with an 8 percent Republican registration advantage.

Republicans in Orange County have mounted early challenges to oust Norris in an attempt to make her a one-term assemblywoman and return the district back into Republican hands.

As of July 2019, two Republican challengers have announced a run to unseat Norris. The Epoch Times had the opportunity to speak with Newport Beach Mayor Diane Dixon, about her decision to run.

Dixon received her undergrad at USC and spent 30 years as a senior executive at Avery Dennison, a fortune 300 company that specializes in global manufacturing.

After she decided to step away from the corporate world, she found out that there was an opening on the city council in the city’s local newspaper and decided to run in 2014.

“I picked up the Daily Pilot and saw that my particular council district had been termed out and there were two people who intended to file,” she said. “I thought ‘If not now, when?’ I’ve always wanted to run for public office, but it was never an option from a time standpoint. So, I launched an effort to run for city council and those two particular candidates withdrew. I ran unopposed in my first race and raised about $100,000.”

Dixon also served as mayor during a portion of her first term on the council and ran for re-election in 2018, becoming mayor again.

She explained that she did not want to serve beyond her capacity as mayor until the loss of a number of Republican-held seats in last year’s midterm elections in Orange County.

After the 2018 elections and the Democratic Party’s increased supermajority in the legislature, Dixon began to notice rapid changes being implemented by Sacramento and the new Governor.

“What I began to see before I decided to run was the proposed legislation and goals coming out of Sacramento and the Governor’s office. With a supermajority, we’re a one-party state essentially. I see as a local official the power grab that is happening and will continue to happen because there’s very little resistance. Republicans are doing the best they can, but the numbers are so overwhelmed by the supermajority.”

She further explained how the decisions coming from Sacramento have affected her ability to manage her city.

“As a local official, I see [a lot of] mandates for affordable housing, which I’m not opposed to, but the mandates are coming at a furious rate, and there’s a lot of punitive measures being tied into enforcing and changing zoning laws. Zoning is intrinsic to the power of a local government to create a community that conforms to the local needs. Going to Sacramento and talking to legislators, they basically don’t care what local officials think because say ‘We’re Sacramento and we know best,’” she said.

Dixon said she waited for another experienced Republican to run against Assemblywoman Cottie Petrie-Norris, but when none did, she decided that she would.

“I began to wonder who is going to represent Republicans and run for higher office? Are they just going to abandon the opportunity to reclaim that seat? I didn’t hear anybody and that just motivated me more because I refuse to abandon a challenge to do the right thing. I just felt, ‘Well if no one else is going to do it, I’m going to do it.”

When asked about what went wrong for Republicans in 2018 and what she would do differently, Dixon said there were a number of factors to the loss, but that she had the confidence that she could win back the voters that supported Assemblywoman Norris.

“I think that not enough money was raised. [But] I think the tidal wave that happened in 2018, whether it was anti-Trump or not, it was just easy for people to go Democrat all the way down the line, and there was the ballot harvesting issue. I think clearly [Harper] could have won in my own opinion. He won the number one position in the primary by 12,000 votes and then he lost those same votes in the general. Those are the votes I’m going to bring back. There are a lot of stories of college-educated women going to the Democratic column and I intend to bring those back,” she said.

Dixon admitted that the election wouldn’t be easy, but that she was prepared for a tough fight that she believes she can win.

“It’s not going to be a walk in the park. Assemblywoman Petrie-Norris has been given a blank check by the governor to sprinkle money all over Orange County, so it’s going to be a tough fight. [By 2020] I will have been serving in elected office for 6 years, serving two years as mayor on city council. I think that’s an important training ground to serve in the state legislature or any higher office.

“The fundamental difference [between my opponent and I] is that we just have a different approach to policy. I believe in Republican principles of protecting businesses large and small, creating a strong economy, eliminating onerous regulations.”

Mayor Dixon concluded by saying that working across the aisle to achieve a more balanced approach to government is a key priority for all California voters.

“I’m a conservative through and through, but you have to find common ground with the other side or you can’t get anything done. You’ve got to work incrementally to restore order in our state. I am a fiscal conservative. I will work across the aisle to create safe communities and stronger local control.”

In addition to the incumbent Assemblywoman Petrie-Norris, Diane Dixon will also be facing Orange County Prosecutor Kelly Ernby in the March 3rd primary. The top two in the primary race will advance to the general election next November.