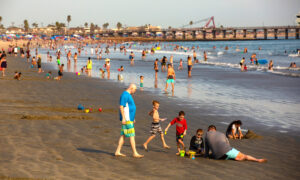 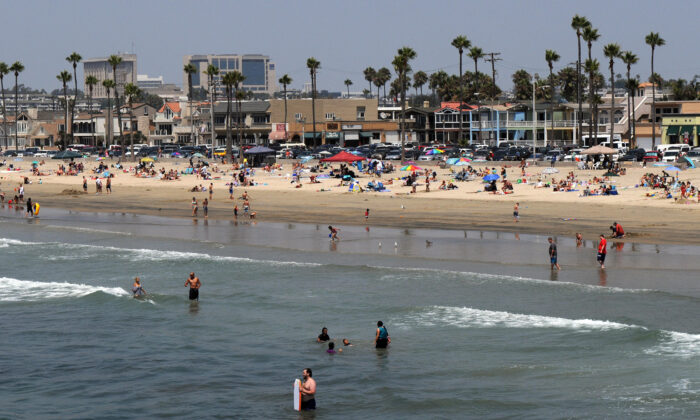 A view of Balboa beach, one of the popular beaches of Newport Beach, Calif., on Aug. 17, 2009. (Gabriel Bouys/AFP/Getty Images)
Southern California

The Newport Beach City Council has voted in favor of a new ordinance designed to increase restrictions on how short-term rentals operate within city limits.

The ordinance, barely passing by a 4-3 vote at the council’s Oct. 13 session, establishes a minimum three-night stay requirement for short-term rentals. It also puts a cap on citywide short-term lodging permits at 1,550, institutes a waiting list, and establishes a new minimum-age requirement of 25 for those looking to rent.

The debate over short-term rentals in the Orange County beach community has been long-simmering. Many Newport Beach residents have complained about loud noises, partying, trash, and other issues related to the rentals and the largely out-of-town visitors who occupy them.

Mayor Will O’Neill voted against the new ordinance, citing concern from “good operators,” those landlords who have abided by the city’s rules and regulations for vacation rentals.

“One of my understandings of the purpose of really starting this process—which feels like over a year ago at this point—was to make sure that we were looking out for our residents and also to ensure that good operators are being rewarded,” O’Neill said at the meeting.

“And one of the concerns that I have tonight, as opposed to previous times with short-term lodging modifications that have been brought forward, is our good operators seem very upset.”

O’Neill said he was concerned that despite passing “some pretty significant changes,” the city hasn’t had enough time to “see if that enforcement is going to work.”

“And then we’ve gotten on the wrong side of our good operators at this point,” he continued.

Councilman Jeff Herdman, who voted in favor of the changes, said the new ordinance was not aimed at affecting good operators. The goal was to try to help residents experiencing issues with nearby rentals.

“People who have short-term lodging units in their neighborhoods that are causing their lives to be disrupted, we have a responsibility to protect the well-being of those people in our city,” Herdman said during the meeting.

“We’re not aiming any of our work at good, reliable rental agencies and our property owners. We’re just in the process of trying to get an industry within our city regulated and under control.”

Councilman Kevin Muldoon voted against the new ordinance, saying he thought the new rules were “a violation of someone’s right to use property.”

“It’s almost like we’re squeezing the balloon at different areas and waiting for it to pop out somewhere else,” Muldoon said.

“I really at the end of the day just think that enforcing the rules on the books as they go, to noise and parking especially, and doing so in a heavy-handed manner is the most effective way to solve these problems.”

In July, Newport Beach added other new rules regarding vacation rentals in the city, including requiring owners to list rental permit numbers in all advertisements and placing limits on how many people can be in each home.

The July amendments also created a new hotline for nearby neighbors to call with complaints.

Randy Beck, a guest speaker over the phone, told council members that he had been a resident on the beach since 1988 and owned a short-term rental property.

Beck said he only bought the property after calling the city “under the premises that the property would be transferable when we purchased.” He added that since then, however, the rules had changed many times.

“Many years before, you changed the rules on our one lot, which was fine. And you gave notice: if you did not have a license at a certain date, it would not be eligible. That’s totally fine. But this is a little different situation—where we purchased under the agreement that we would be able to transfer our property under the current law, so I just thought that was significant.”

Another speaker, who did not identify himself, discussed the problems his community had encountered as a result of the rentals.

“In Newport, I’ve seen a massive increase in sales in my community, with the accompanying deterioration of quality of life that seems to diminish daily,” the speaker told the council.

“I thought I had escaped the chaos … but apparently not. The tragedy is the loss of privacy, our peaceful enjoyment, the feeling of community. Outsiders consider this a fun zone.”

Councilmembers Diane Dixon, Duffy Duffield, and Joy Brenner all voted with Councilman Herdman in favor of the amendment, while Councilman Brad Avery joined Mayor O’Neill and Councilman Muldoon in voting against it.

Before going into effect, the ordinance will need to pass another vote at Newport Beach’s next council meeting on Oct. 27 to accept the latest changes, then receive approval from the California Coastal Commission.

According to the city’s dashboard, there are nearly 1,500 active short-term lodging permits in Newport Beach.