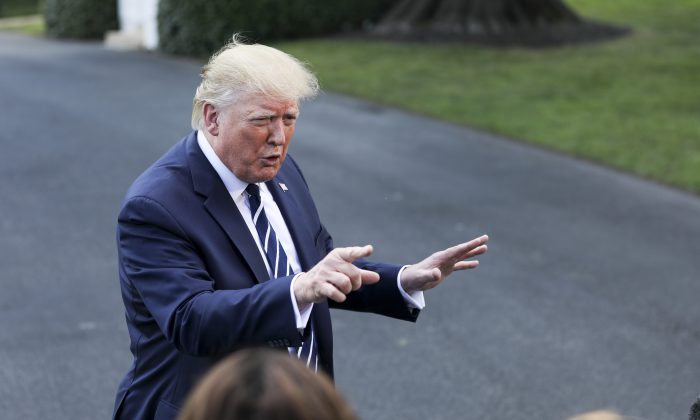 Newlywed Couple Praises Trump After He Visited Their Wedding

A bride and groom who were visited by President Donald Trump during their wedding over the weekend, made a statement about how much they support the president.

Trump appeared at the wedding for Nicole Perosi and PJ Mongelli, who tied the knot at the Trump National Golf Club in Bedminster, New Jersey, on July 20.

They “didn’t think twice” when deciding where to get married, they told Fox News on July 22.

Videos posted on TMZ as well as social media showed Trump making an appearance at the event. Perosi appears to say “you’re the best” to Trump in the TMZ video.

They had sent several invites to Trump after getting engaged at the New Jersey golf club in 2017.

“Staten Island is the greatest,” Trump said when Mongelli told him that hundreds of guests from the New York City borough would be attending. “I love it. I’ll see if I can stop by.”

The president made another appearance later in the wedding while the crowd chanted “USA.” TMZ described the wedding as a “MAGA”-themed event, and Fox noted the venue was adorned with flags and pro-Trump banners.

So honored to have President Trump @realDonaldTrump at my brothers wedding last night at @TrumpBedminster . Thank you for making their dream come true! #45 #KAG #2020 #USA @realDonaldTrump pic.twitter.com/hwlxaIQpYH

“The response was amazing, the energy in that whole ballroom was unbelievable. Even the staff said they have never seen a wedding with such energy,” said Perosi.

She noted that some people at the event didn’t share their views on the president, but she said it wasn’t a problem as “the leader of the free world is at our wedding, and even though we’re very proud Trump supporters, most importantly we’re all proud Americans.”

The president has appeared at several weddings at the New Jersey venue, though this is reportedly the first “MAGA”-themed one.

According to Fox, the newlywed couple said they want to make Trump the godfather of their future children.

“Our phones have been blowing up, we’re just amazed, it’s very surreal. I feel like we’re dreaming,” they said.

Several weeks ago, a Michigan couple threw a “MAGA”-themed wedding in Kalamazoo.

“It looked like America threw up all over my wedding — and I’m not sorry,” newlywed Audra Johnson told Fox 17. She wed U.S. Marine veteran Jeff Johnson in the Trump-themed ceremony on July 4th.

According to the Fox station, she and her husband included “don’t tread on me cufflinks,” a petition for a pro-life “heartbeat bill,” and Ameican flag nails, but the bride’s dress contained a secret.

“The dress is actually an Andre Soriano original,” Johnson added. “It’s actually made out of a MAGA flag.”

Soriano is known for pro-Trump gowns, including one that was worn at the 2017 Grammys.

“We were gonna do our photos with the Trump hats and she said, ‘You know I love you, but I can’t wear the Trump hat,’” Johnson continued. “I said, ‘It’s OK. It’s OK. Just wear a red hat. We still love you. We can have completely different opinions about everything and still love each other.”

Her husband, Jeff, wore his Marines uniform during the ceremony, MLive reported.

She added that the groom’s father didn’t attend due to his displeasure with Trump.

“It wasn’t a political stunt — it’s legit what we wanted. It wasn’t to make a political statement,” Johnson added to MLive. “I want people to realize that it was such a diverse group of people that got together that day. We were able to understand that we don’t all have to agree to still share love together. I think that’s what people are missing out on.”