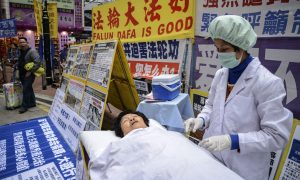 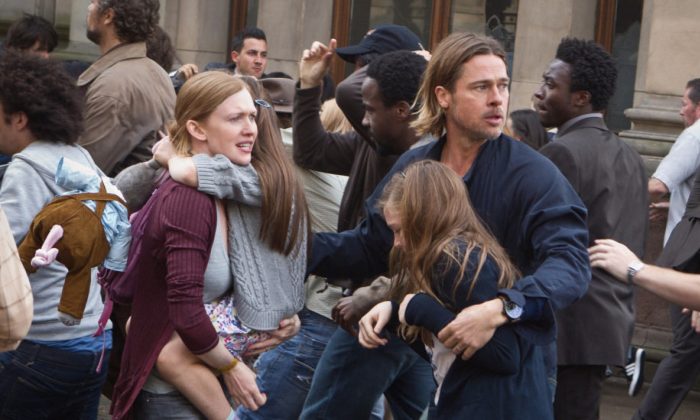 A scene from the zombie film, World War Z, starring Brad Pitt (center R) and Mireille Enos (center L). The film is adapted from a novel, which features a plot about the black market organ trade in China as the means for the zombie virus spreading. (Paramount Pictures)
Entertainment

When executives at Paramount Pictures decided to modify the upcoming zombie apocalypse film World War Z to delete a reference to China as the origin of the zombie virus, they expected China’s censors to approve the film for a theatrical release in the country—the world’s second largest movie market.

However, the film, which opens on June 21 in the United States, was rejected by China’s censorship authorities, according to entertainment blog TheWrap.com, citing a source “familiar with upcoming releases in China.” A Paramount executive denied the news and told the blog that the studio had not yet received a response from China.

According to TheWrap.com, the scene in question showed the characters debating the location where the outbreak of the zombie virus began, which in the book was China. Paramount executives had the scene deleted preemptively to ensure that the film will score a deal to play in China’s theaters. Currently, the Chinese regime has a quota of 34 foreign films that they allow to be screened in the country.

While the scene was said to be a minor plot point in the film, China and its black market organ trade play a critical role in the novel that the film is adapted from.

Written by Max Brooks and published in 2006 under the same title, the novel begins in China, where the initial patient to be infected with the zombie virus is said to be a young boy from a remote Chinese village. The virus then spreads to other parts of the world through the black market organ trade, where infected organs extracted from executed political prisoners are sold to people in need of organ transplants. Those with the transplanted organs then die and come back alive as zombies.

“Years before the outbreak they’d been making millions on organs from executed political prisoners. You think something like a little virus is going to make them stop sucking that golden tit?” Brooks has one of his characters say in the novel.

The novel goes on to describe how the illegal trade worked: “You remove the heart not long after the victim’s died … maybe even while he’s still alive … they used to do that, you know, remove living organs to ensure their freshness … pack it in ice, put it on a plane for Rio … China used to be the largest exporter of human organs on the world market.”

It is unclear whether this organ harvesting storyline existed in the early drafts of the script, or whether it was cut from the film to please Chinese censors, though it is certain that the storyline won’t be in the final cut of the film. Since the movie rights were sold to Paramount Pictures in 2006, it is known that the script underwent significant revisions, including a change in the screenwriter.

The original novel was an oral account, written from the perspective of multiple people who survived the zombie war, whereas the film follows a former UN employee, played by actor Brad Pitt, as he tries to find a way to stop the zombie virus from spreading.

Save the zombie outbreak, and the depiction of organs being put on ice and exported to other countries, Brooks’ novel provides a generally accurate depiction of the Chinese regime’s current organ harvesting practices from prisoners of conscience. Since 2006, when Canadian lawyers David Kilgour and David Matas published a report revealing the regime’s systematic harvesting of organs from Falun Gong practitioners held within China’s prisons, mounting evidence has emerged of prisoners in China being killed for their organs, which are then sold for profit to those needing organ transplants—the majority of the organs suspected to be from adherents of Falun Gong, a spiritual practice that has been banned and severely persecuted by the Chinese regime since 1999. An exponential increase in the number of organ transplantations in China since 2000 has led experts to estimate that tens of thousands of organs from Falun Gong practitioners have been harvested.

Brooks himself has said in an online Q&A that he did extensive research to ensure that everything in the book, excluding the zombies, “is either taken from reality or 100% real.”