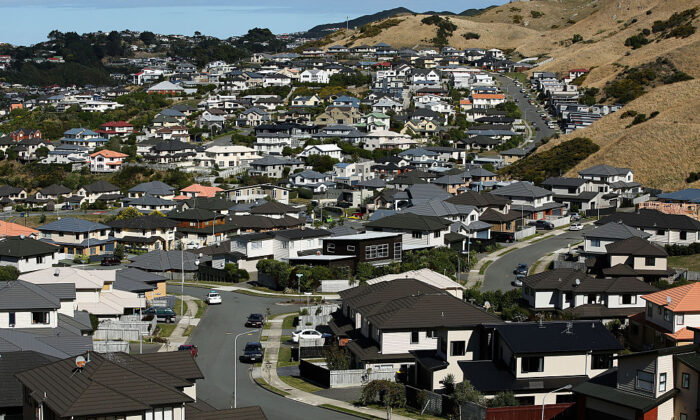 A general view of houses in the suburb of Churton Park in Wellington, New Zealand, on April 9, 2016.(Hagen Hopkins/Getty Images)
Asia & Pacific

The value of the average home has fallen 2.3 percent from its peak to just over $1 million.

Kelvin Davidson, the chief property economist at CoreLogic NZ, said the explosion of house values after COVID-19 has now given way to a “firm correction.”

“It’s possible the national average property value will ultimately drop by 10 to 15 percent by the middle of 2023, which broadly suggests we’re potentially halfway through this correction in both duration and scale,” he said.

The correction is driven by a shift in the balance of power from sellers to buyers, higher interest rates, and tight credit conditions.

“This weaker phase for the property market looks set to continue into 2023, and even when the floor is reached, the experience of the Global Financial Crisis was that it took another two to three years for the next upswing to start as values plateau,” Davidson said.

Data from the Reserve Bank of New Zealand on mortgage lending also showed that new loans, top-ups, and refinancing were $6.8 billion in May, down 23.6 percent or $2.1 billion from the same month last year.

“The number of loans being written in recent months has fallen further, reflecting weakness for both owner-occupiers and investors,” Davidson said.

According to the Real Estate Institute of New Zealand, residential property values fell 9.5 percent in June from the November peak.

ANZ Bank also downgraded its house price forecast from 12 to 15 percent, to reflect its new expectations on how high the cash rate will need to go to address inflation levels.

It noted that the June quarter inflation figures suggested that high underlying inflation could stick around longer than previously thought.

“New listings are back to their typical seasonal pattern, but softening sales mean housing inventories are rising. Inventories are now at a six-year high and trending higher. Unsurprisingly, the number of days it is taking to sell a house is also trending higher,” ANZ Chief Economist Sharon Zollner said.

While the risk of recession in the New Zealand economy remains prevalent, Davidson said the property market should remain in a correction phase as long as unemployment levels remain low.