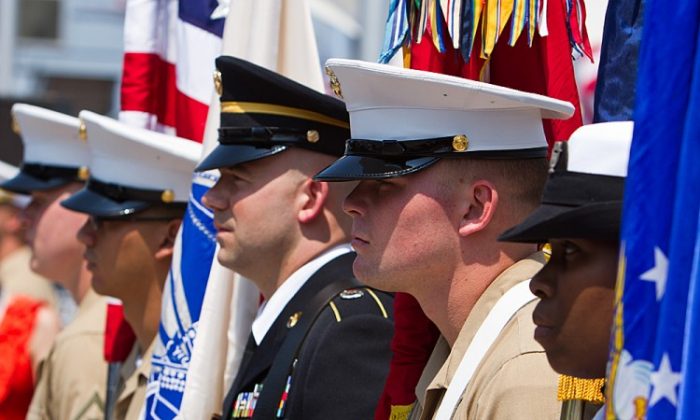 Military personnel standing at attention for the Memorial Day service at the Intrepid Museum on May 28, in New York. (Benjamin Chasteen/The Epoch Times)
US

NEW YORK—Some New Yorkers took time from their day on Monday to join veterans and active service members at various events throughout New York City, honoring those who have fallen while serving their country.

At a ceremony on Pier 86 next to the USS Intrepid, U.S. Navy Vice Adm. William D. French spoke.

“Those who serve and those who fall are not just simply wartime statistics,” French said. “They are not faceless men and women. They are real people. They are fellow citizens. They are America’s sons and daughters, your family, friends, and neighbors. So today is the day to remember them.”

During the ceremony, four wreaths were laid in the water. The first honored all U.S. military personnel lost in past and current conflicts, the second military personnel from allied nations, the third the crewmembers from the USS Intrepid who fell during action, and the fourth those lost in space exploration.

“Today we will lay four memorial wreaths in the Hudson River, in memory of all the brave men and women, heroes, who have made the ultimate sacrifice for their countries,” said Susan Marenoff-Zausner, president of the Intrepid Sea, Air, and Space Museum.

After the wreaths were laid in the water, a 100-foot American flag was unfurled, held by veterans and active duty service members.

One of those holding the flag was World War II veteran Rick Carrier. A first wave D-Day veteran, Carrier stormed the beaches of Normandy, served in five major battles and literally blew off the lock at Buchenwald, liberating the Jews held captive at the German concentration camp.

Carrier wore his vintage uniform, draped in metals. The one he wears around his neck is engraved with his image and that of a 14-year-old boy named Irving Roth whom he rescued upon entering Buchenwald on April 10, 1945.

Carrier has traveled the world telling his story, most recently in Poland. However, taking part in the Memorial Day in his hometown was special.

Carrier was holding firmly with both hands to the stars and stripes as the bugler played “Taps.” He got a little teary eyed recalling the friends he saw perish in World War II.

“I was choked up because I saw that—I saw so many of my friends going into the ground with an American flag on it,” Carrier said.

For Carrier, the flag represented not just freedom, but those lost fighting for it. “This flag is covering all the dead from all the American wars. Wherever these soldiers died, one of these is on their casket,” Carrier said.

“When I was on that flag, it meant I was a survivor of the war,” Carrier said. “It means I am alive and I am honoring the people that died. Holding the flag is an honor.”

Vice Adm. French urged all those in attendance not to forget why they have Memorial Day off work.

“Too often we are caught up in the humdrum of the day, whether it be barbecues, parades, various shopping events, or sales, and allow ourselves to be distracted from a responsibility to remember,” French said.

“That responsibility and our duty is not to forget their commitment, their sacrifice, their loyalty, their heroism, to never forget what they have done for us and our children.”