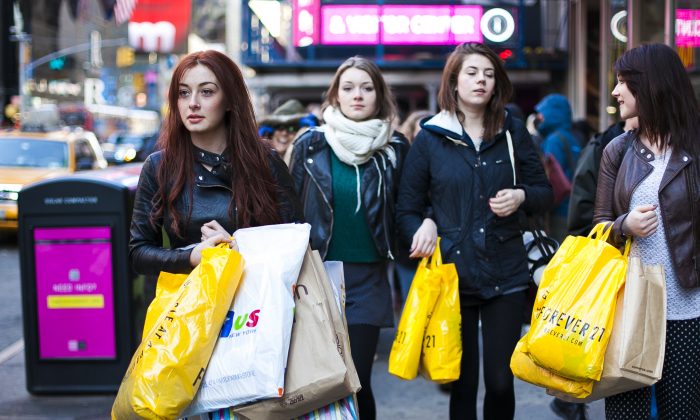 NEW YORK—On a rainy Tuesday evening, Councilmember Andy King was at the entrance for the 2 and 5-line subway station on 233rd street in the Bronx, handing out tote bags for free.

King and staff members of the Citizens Committee for New York City had brought 600 tote bags there to promote a new bill that would add a 10 cent tax—paid by the customer—on plastic bags in the city’s grocery stores. The tote bags, the theory goes, would be used in place of plastic ones.

Activists have long decried the negative impact that plastic bags have had on the environment, and laws aimed at cutting down on its usage have gained traction in the past few years.

King said that his constituents have been favorable towards the anti-plastic initiative, and the 600 bags were handed out in under half and hour. But not everyone is enthusiastic about the new bill, which would force the consumer to pay a dime per plastic bag.

“I think it’s not fair we have to buy the bags, imagine if we have a lot to carry and we don’t have a car, how are we supposed to pay extra,” said Kafia Morrison, who was one of the last people King handed a tote bag to.

Morrison said she realizes that there’s an environmental concern, but that the problem of pollution should be tackled through other avenues.

“We should reduce how much plastic is used in plastic bottles, we should recycle more,” she said. “I don’t think they should tax us at all for bags.”

But activists aren’t too worried that a fee on plastic bags isn’t an immediate hit with voters, who they say will approve of the regulation in retrospect.

“Like a lot of things, it’s probably not wildly popular, it’s like the smoking ban. It was not popular, but now the smoking ban is popular. It’s like Obamacare, first it wasn’t popular, now people like it,” said Peter Kostmayer, CEO of the Citizen’s Committee, who was there with King handing out the tote bags.

“You can recycle clothing, tires, food, but plastic bags can’t be recycled, so they form in the oceans, they come together and create huge islands, destroy marine life, they get up in the trees, they’re very unsightly in neighborhoods.”

The Citizen’s Committee will distribute 50,000 tote bags all over New York City to help promote the fee on plastic bags. Inside each tote bag are two info-sheets detailing the environmental impact that plastic-bag use has on the city.

“I think if this passes, people will say it’s a good thing. It takes times to educate people,” Kostmayer said.

For the Citizen’s Committee, the ultimate goal of the campaign is to eliminate the use of plastic bags in the city altogether, but an outright ban is politically out of reach.

“We can’t ban it, there are too many special interests,” said Saleen Shah of the Citizen’s Committee. “There’s a lot of resistance, the opposition is organized, it’s the American Chemistry Council, they’re the plastic bag lobbyist for the industry.”

The fee primarily targets groceries and bodegas. Restaurants and liquor sellers are exempt from the fee, and the details—such as whether or not the fee applies to restaurants within groceries—are still being worked out.

If enacted, the plastic-bag law would fine businesses $250 for the second violation, and $500 for each time after that.

Even though the reform is incremental, the plastic-bag proposal has met fierce resistance from restaurant associations and plastic-bag manufacturers like Novolex, which has created a letter sending campaign to urge NYC lawmakers to vote against the bill called “Bag the Tax NYC.”

The campaign’s website argues the tax is regressive and would hurt the city’s poor and elderly.

Novolex could not be immediately reached for comment on how they view the environmental impact of plastic bags.