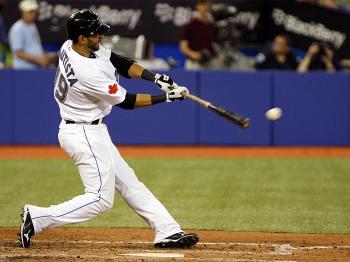 Bautista—who leads the MLB in home runs this season—hit his 39th and 40th homers, and Brandon Morrow delivered 12 strikeouts in six innings of stellar work.

Eduardo Nunez was the only hitter that Morrow didn’t strike out, and the two runs against him came from the only two Yankees he walked.

Yankees pitcher Ivan Nova had a commendable starting debut after shaking off a nightmare start.

With the bases loaded and no outs in the bottom of the first, left fielder Brett Gardner came to Nova’s rescue by catching a fly ball and rocketing it home in time for catcher Francisco Cervelli to tag Fred Lewis out for a double play.

The momentum shift put Nova at ease, as he then struck out Adam Lind to end what could have been a disastrous inning.

The 23-year-old Nova got into a good grove midway through the game, retiring nine straight Blue Jay batters until Vernon Wells singled on a soft ground ball in the bottom of the sixth. He pitched for 5.1 innings and was relieved by Boone Logan.

The Yankees scored first in Monday’s game with Robinson Cano hitting an RBI double in the top of the first to send Mark Teixeira home from first. Teixeira had been walked previously by Morrow with one out.

But Bautista hit a two-run homer off a hanging curve ball that gave the Jays a 2–1 lead in the bottom of the third.

Tensions rose in the top of the sixth inning with Blue Jays shortstop Yunel Escobar and manager Cito Gaston getting ejected over complaints about poor strike calls against Escobar that ended the previous inning.

Jorge Posada then hit a low fast ball for a double to deep right field that sent Robinson Cano in from first to tie the game 2–2.

Then a brawl almost broke out in the bottom of the sixth after Nova hurled a fastball toward Bautista’s head.

Nova didn’t appear to be trying to hit Bautista, but the fact that the pitch came after Bautista blasted a foul ball to the left deck made it hard for the slugger to forgive. After the two exchanged some harsh words the dugouts cleared but no punches were thrown.

Bautista left no doubt with a solo blast in the top of the eighth off reliever David Robertson to give the Jays a 3–2 lead.

The Yankees had an opportunity to make a comeback in the top of the ninth against Jays closer Kevin Gregg with Cano on first after a walk and no outs.

After Posada flied out to right field, Curtis Granderson was called out on strikes in what looked like a bad call by the umpire. Then pinch hitter Derek Jeter popped out to end the game.

The Yankees face two more games in Toronto before moving on to Chicago later this week.