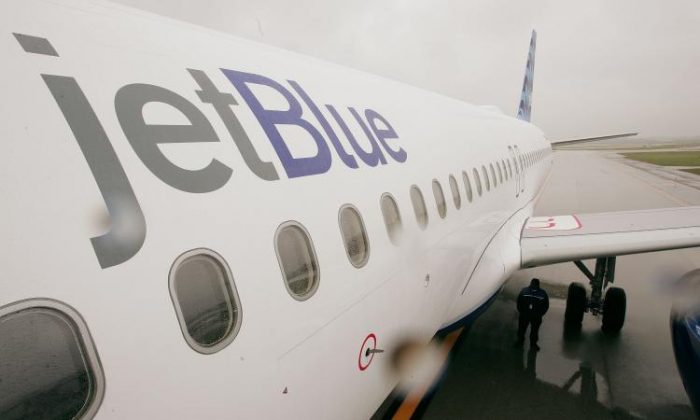 A New York woman is suing JetBlue over its reaction to her spilling burn-inducing tea on herself that caused second- and third-degree burns.

Michelle Lavin, 25, was taking a 5 hour, 40 minute flight from New York to Las Vegas in 2014 to visit her sister and some friends over the Labor Day weekend when it happened.

While on the plane she ordered tea, which she said was full to the brim, and so piping hot she could feel the blazing heat through the cup. The cap was also not on properly.

She heard two passengers in the back of the plane arguing—a male passenger was complaining about a female passenger’s barking dog and kept asking her to make it be quiet.

“She just screamed. It was insanely loud, like a horror movie. I got very nervous and everybody turned around and it was frightening,” Lavin told the New York Post.

Lavin turned around to see what was going on when the woman went crazy, and spilled the tea on herself.

She started screaming in pain because it felt like her “pants were on fire,” she told the Post.

“I was in excruciating pain and had tears running down my eyes and asked them to get me anything. Cream. Something,” she told the Post.

The flight attendants looked at her like she was crazy, she said, and told her they had nothing for burns.

When she tried to stand up so she wasn’t sitting on her burns, they told her to stay seated.

Feeling misunderstood about how much pain she was in, she pulled down her pants and showed them the burn on her bottom. This made them much more sympathetic, she said.

“They were horrified, and then they were much nicer. At that point I realized they knew they had a problem. They said, ‘This is very bad,’ ” she told the Post.

Two female flight attendants, including the one who brought her the tea, offered her ice and aspirin. She was later offered a stretcher to take her to the hospital.

Not wanting to make any more of a scene, she declined the stretcher and opted to go to the emergency room to be treated for her burns instead.

Now, almost exactly three years later, she told the Post she’s not suing for the burns from the hot tea, but for the flight attendants’ response to her suffering.

The amount Lavin is suing the airline company for is unknown, the Daily Mail reported.