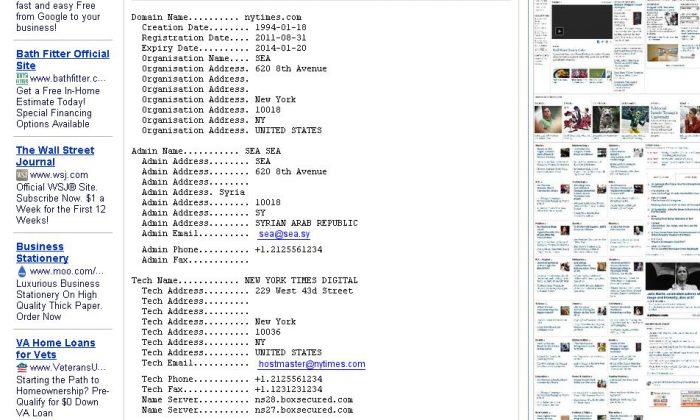 The New York Times website went down for some users on Tuesday, and a reporter with Bloomberg is saying that they got hacked.

Sarah Frier is saying the Times has told her they suspect their website has been hacked.

New York Times confirms to me that they suspect their website has been hacked.

New York Times spokesperson: “Our initial assessment is that this is most likely the result of a malicious external attack.”

The Times said that the website “is experiencing technical difficulties.”

The New York Times Web site is experiencing technical difficulties. We are working on fully restoring the site.

Information from a Domain Server System shows that the Syrian Electronic Army, a pro-government hacking group, may have been behind the attack. Under Admin Name, Admin Address, and some other slots, SEA SEA, SYRIAN ARAB REPUBLIC, and sea@sea.sy are inserted.