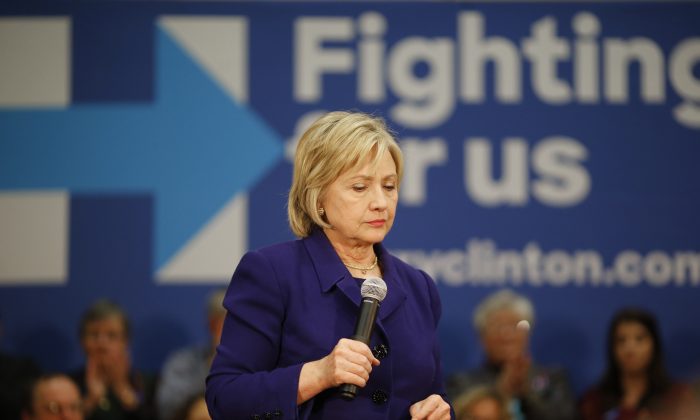 With poll numbers sagging in Iowa and New Hampshire days before the primary starts, Democratic presidential candidate Hillary Clinton gets a push with an endorsement from the New York Times.

“The Times editorial board has endorsed her three times for federal office — twice for Senate and once in the 2008 Democratic presidential primary — and is doing so again with confidence and enthusiasm,” the editorial reads.

The Times acknowledged that the rise of Bernie Sanders has had a salubrious effect on the race, bringing issues like income inequality into the fore.

Sanders himself is less electable than Clinton, the editorial states, and his plans aren’t pragmatic.

“In the end, though, Mr. Sanders does not have the breadth of experience or policy ideas that Mrs. Clinton offers,” the editorial reads. “His boldest proposals—to break up the banks and to start all over on health care reform with a Medicare-for-all system—have earned him support among alienated middle-class voters and young people. But his plans for achieving them aren’t realistic, while Mrs. Clinton has very good, and achievable, proposals in both areas.”

“Hillary Clinton is the right choice for the Democrats to present a vision for America that is radically different from the one that leading Republican candidates offer,” the editorial concludes.

Clinton has much to thank for in this endorsement. The candidate, who was long presumed a shoo-in for the Democratic nomination, has received a fierce challenge from Bernie Sanders, who is now out-polling her by double-digits in New Hampshire, and is in a statistical tie with her in Iowa.

Though Clinton still polls well above Sanders nationally, victories in the two key primary states would give the Sanders campaign a significant jolt.