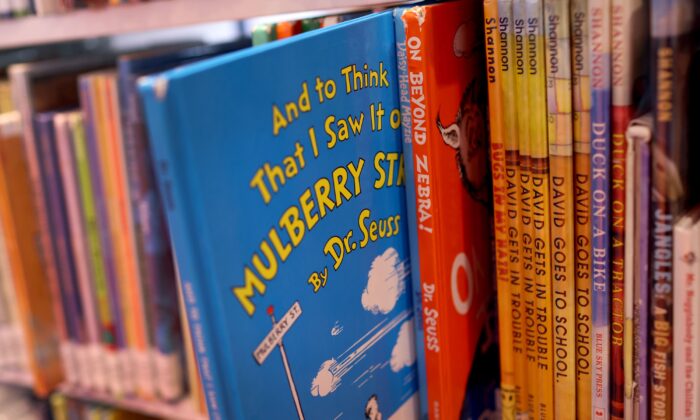 New York Public Library said it will keep circulating all Dr. Seuss books in its collection, including the six titles that will no longer be published over charges that they contain racist imagery.

The six books in question will not be taken out of circulation until they are too worn to be lent out, New York Public Library spokeswoman Angela Montefinise said Wednesday.

“As with all public libraries, the New York Public Library does not censor books,” Montefinise said in a statement to the New York Post.

Montefinise noted that since the publication of the six books are being discontinued by Dr. Seuss Enterprises, the company that manages the legacy of the celebrated children’s author Theodor Seuss Geisel, the “very few copies” the library has will “continue to circulate until the are no longer in acceptable condition.”

“In the meantime, librarians, who care deeply about serving their communities and ensuring accurate and diverse representation in our collections—especially children’s books—will certainly strongly consider this information when planning storytimes, displays, and recommendations,” she added.

Dr. Seuss Enterprises announced on Mar. 2, Theodor Seuss Geisel’s 117th birthday, that it has decided to cease publication and licensing of “If I Ran the Zoo,” “And to Think That I Saw It on Mulberry Street,” “McElligot’s Pool,” “On Beyond Zebra!,” “Scrambled Eggs Super!,” and “The Cat’s Quizzer.”

“These books portray people in ways that are hurtful and wrong,” Dr. Seuss Enterprises said in a statement, saying that the move was “part of our commitment and our broader plan to ensure Dr. Seuss Enterprises’ catalog represents and supports all communities and families.”

First published in the 1930s and 40s, the books came under fire in recent years due to depiction of different ethnic and racial groups, which some find offensive. In “And to Think That I Saw It on Mulberry Street,” an Asian man is portrayed wearing a conical hat and eating from a bowl with chopsticks. “If I Ran the Zoo” includes a drawing of two African men wearing grass skirts and carrying exotic-looking animals.

Meanwhile, House Minority Leader Kevin McCarthy (R-Calif.) on Tuesday blamed his Democratic colleagues for the cancellation of Dr. Seuss books, claiming that those lawmakers want to “outlaw Dr. Seuss” and tell Americans what they can and cannot say.

“Under the Constitution, we generally defer to states and counties to run elections. Democrats want to change that,” McCarthy said on House floor. “First, they outlaw Dr. Seuss and now they want to tell us what to say.”