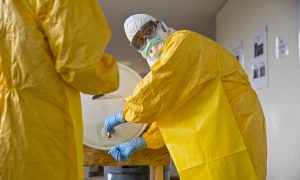 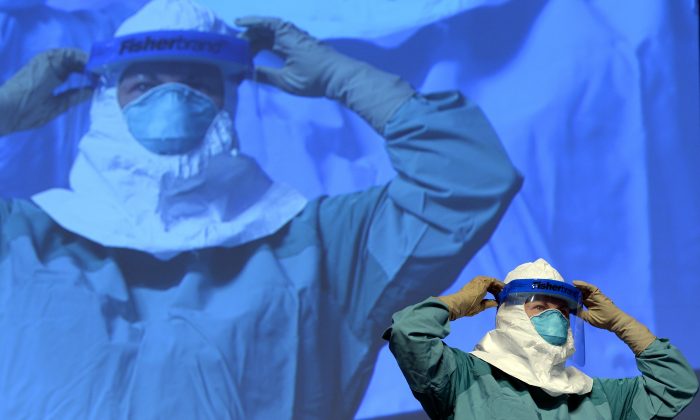 Barbara Smith, a nurse at Mount Sinai Health Systems and a CDC official demonstrate the proper technique for donning protective gear during an Ebola educational session for healthcare workers at the Jacob Javits Center in New York, Oct. 21, 2014. (Timothy A. Clary/AFP/Getty Images)
Ebola

NEW YORK—New York City and the state government have created a program to offer financial security to health workers returning from West Africa, designed to promote Ebola relief efforts in spite of a rigorous quarantine policy that could deter humanitarian aid.

After a doctor who had worked in Guinea was diagnosed with the virus in New York City, Governor Cuomo issued a 21-day mandatory quarantine for returning healthcare workers who have had contact with Ebola patients, which some critics argue will deprive aid efforts of much needed manpower.

The new program would guarantee health workers returning from Ebola would continue to receive their pay, health care, and employment status without interruption, and also promised reimbursements for income lost in the case of a quarantine, the mayor’s office said.

“The brave and selfless doctors, nurses and health care workers who voluntarily travel to hot zones in West Africa to combat Ebola are heroes, plain and simple, and we need their hard work, courage and sacrifice to protect all of us across the globe from this deadly virus,” Mayor de Blasio said in a statement. “We must also do more to encourage additional health care professionals to join this critical fight, and the partnership unveiled today will be instrumental in growing the ranks of these valiant doctors and nurses.”

The program is being developed in collaboration with New Jersey, which has a similar Ebola quarantine policy, and various medical and hospital associations in New York.