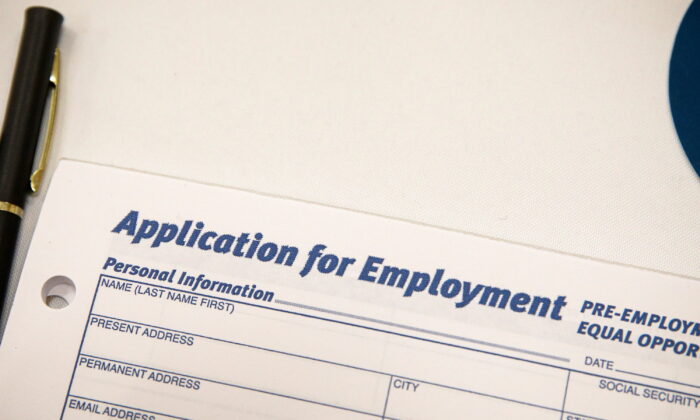 An employment application form is displayed during a restaurant job career fair organized by the industry group High Road Restaurants in New York City on May 13, 2021. (Brendan McDermid/Reuters)
Economy

Fewer Americans were changing jobs in July compared to the same time in 2021, a sign that the U.S. labor market is cooling, according to the Federal Reserve Bank of New York’s July 2022 SCE Labor Market Survey released on Aug. 22.

The rate of employees quitting their jobs to work for a different employer fell to 4.1 percent in July compared to 5.9 percent 12 months prior.

The average reservation wage—the lowest pay level that survey respondents said they would be willing to accept for a new job—rose to $72,873, up 5.7 percent from $68,954 the year before.

There also appears to be a widening split by gender and income bracket, the survey reported.

Reservation wages have climbed faster among men and younger workers since the pandemic began, while the decline in job transition was more pronounced for women and for those with a household income less than $60,000.

The average reservation wage for Americans with no college degree, and those age 45 or younger, has risen by more than 23 percent since March 2020 when the COVID-19 pandemic first hit.

“The biggest rise from pre-pandemic level is for workers without a college degree. But the large jump over the past quarter for college educated workers is notable,” Nick Bunker, an economist at job search company Indeed, wrote on Twitter.

The latest labor market survey shows that many Americans are still spending time on job searches, with 24.7 percent reporting that they were looking for better employment, up 24 percent from the previous year.

Among those surveyed, 21.1 percent reported receiving at least one job offer in the previous four months, up from 18.7 percent a year earlier.

But the average expected likelihood of receiving at least one job offer in the next four months dipped slightly to 21.1 percent, down from 21.6 percent in July 2021 and below pre-pandemic levels.

Most of the increase in job searching, according to the survey, was driven by people younger than 45 with a college degree.

The number of Americans intending to work longer appears to have declined over the past year, with the average expected likelihood of working beyond age 62 dropping to 48.8 percent, down from 50.1 percent in July 2021.

This was the lowest reading since the survey debuted in March 2014.

Many workers have been quitting their jobs in favor of better wages and working conditions, while businesses have attempted to attract or retain talent with higher salaries in a very tight labor market.

New data from the U.S. Bureau of Labor Statistics on Aug. 19 showed 22 states reporting jobless rates at or below 3 percent in July.

The tightened labor market has also contributed to record high inflation as millions of workers received the largest pay gains in years, Fox Business reported, with earnings rising 5.2 percent in July from the previous year, well above pre-pandemic average of 3 percent.

On a monthly basis, wages rose 0.5 percent, far better than had been expected, according to the August government labor report.

Although Americans’ incomes have rising across the board due to average wage increases, inflation is rapidly eroding those gains.

Soaring prices due to inflation have changed the situation for many workers, as the decline in their purchasing power has put a dent in real incomes over the past year. According to the U.S. Labor Department, average hourly earnings actually declined 0.6 percent in July month-over-month and 3 percent year-over-year after factoring in the impact of rising consumer prices.

As a result, many workers are increasingly only taking new jobs that offer higher wages.

“Conditional on expecting an offer, the average expected annual salary of job offers in the next four months increased to $60,310 from $57,206 in July 2021, reaching the second highest reading of the series,” the New York Fed reported.

The highest reading recorded was in March 2021.