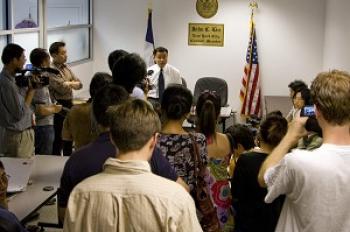 NYC Councilmember John Liu in his Flushing office talks to media before opening his office to constituents who wanted to appeal. He turned away a number of Falun Gong practitioners who had been trying to see him for weeks, yet ushered in several people who had been arrested in connection with violence against Falun Gong. (Edward Dai/Epoch Times)
Opinion

NEW YORK CITY—New York City has an election next week and, however cynical many of the city’s voters may have become about politicians, one candidate should shock them.

John Liu is the Democratic Party candidate for comptroller, the city’s top financial officer. Voters might have doubts about Liu because of his shaky hold on the truth or his too close relations with unions, but they may not know even more serious reasons for concern.

The New York Daily News reported that Liu had failed to refund campaign contributions to those he had helped steer public money to in his role as a New York City Council member—refunds he had promised to make.

The Epoch Times reported other funny business with Liu’s campaign financing. Individuals listed as donors said they didn’t give the amounts Liu said they did, and the records for at least 140 of the contributors were missing the identifying information required by law.

The New York Daily News also reported on the lie that was told in one of Liu’s campaign ads—that he had worked in a sweatshop as a child. But according to his own mother, he didn’t work in a sweatshop.

Voters might also have doubts about Liu when they realize that, with him in the comptroller’s office, the public employee unions might be deciding what would be done with the New York City pension fund.

That is the view of the New York Post in an editorial: “Big Labor may be about to score a huge—and dangerous—victory by installing its puppet, Queens Councilman John Liu, in the enormously powerful job of city comptroller.
“Heaven help New York if it works.”

Forming an alliance with big labor in the Working Families Party (WFP) is the discredited group ACORN.

The Post warns of the ACORN connection: “Liu wants to use the [pension] fund to invest in ‘affordable housing’—a field dominated by scandal-scarred housing giant ACORN, which is bolstered by unions and joined at the hip to the WFP.”

New York’s voters might have reason to worry that a union-controlled pension fund will involve the city in deals its taxpayers can never afford.

But in concentrating on Liu being in bed with the unions, the Post misses the really big story of influence in Liu’s political career.

John Liu is the chosen candidate of the Chinese Communist Party (CCP), and his election would be a very risky experiment for the people of New York City and the United States.

That the CCP has campaigned for Liu is no secret, although much of the evidence lies unseen in plain view for most New Yorkers, in the form of Chinese-language newspapers that are controlled or heavily influenced by the CCP.

For instance, the China News Service (CNS), the Party’s mouthpiece for overseas propaganda, has run 24 special reports on Liu's campaign for the city election, 13 of them after Liu's decision to run for the city comptroller.

When the CCP engages in this kind of propaganda effort, it is directed from the top. In this case, it would be directed by a Party organization called the United Front Work Department.

On March 30, 2007, on a trip to Beijing, Liu met with Xu Yousheng, vice director of the Overseas Chinese Affairs Office of the State Council, which takes its orders from the CCP Central Committee.

Xu’s office acts as an intermediary between the United Front Work Department and the CCP’s foreign embassies and consulates. The United Front is a strategic initiative that aims to expand CCP influence by infiltrating foreign countries.

Liu’s 2007 trip to Beijing was sponsored by six associations known to have close ties to the CCP. The high point of the trip for Liu was perhaps the presentation to him of “The World Is More Beautiful Because of You” award at a banquet sponsored by CCP-linked media companies. He was heralded as a rising political star.

The leveraging of community associations, which may serve some legitimate purposes and whose membership may sometimes be in the dark about the CCP’s role, is of the essence of United Front work. The Party seeks legitimate entities, or legitimate-seeming entities, that do its work for it.

One of the associations that helped sponsor Liu’s trip to China, however, is notorious among Western law enforcement agencies.

The Fukien American Associations is known to be a Triad-front organization with ties to human trafficking and organized prostitution. The organization raised more than $70,000 for his comptroller campaign. Liu often appears at their events.

Liu has shown himself to be quite willing to show gratitude for the CCP’s sponsorship.

When the Chinese military successfully launched a spacecraft in 2003, Council Member Liu immediately went to the Chinese Consulate in New York to present a proclamation.

In March 2008, when CNN’s Jack Cafferty, in response to the brutal repression in Tibet, called the leaders of the CCP “a bunch of goons and thugs,” Liu helped organize a rally protesting Cafferty in New York’s Foley Park.

When the CCP helped instigate attacks on Falun Gong practitioners in Flushing, New York, in the spring and summer of 2008, Liu supported and encouraged those who attacked the practitioners.

Once the unions and ACORN are paid off for their work in helping Liu get elected, what will his focus be? When investment decisions are made about New York City’s $85 billion pension fund, will he be looking out for the interests of the people of New York or his patrons in the CCP?

Liu won the primary with a little over 126,000 votes, out of a New York City population of 8.4 million. Will 1.5 percent of New Yorkers put a communist stooge in office, or, if Liu’s story becomes known, will the people of New York make a wiser choice?