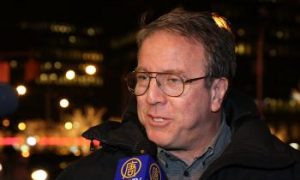 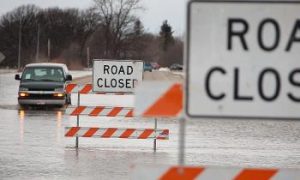 Local Tells of the Fargo Flood
0 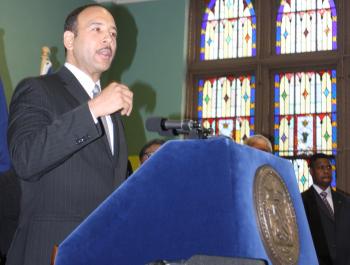 By Tara MacIsaac
Print
NEW YORK—Mayor Michael Bloomberg announced Thursday a new initiative that aims to identify distressed buildings before the health and safety of tenants are jeopardized, and before they become blights on the faces of neighborhoods.

The initiative will use bank, tax, and housing code violation records to pinpoint residential buildings in need of help. The city will also work closely with tenant groups to this end. Previously, the method of identifying distressed buildings was much more passive, often relying on complaints from 311—hence the new method has been titled the Proactive Preservation Initiative.

“Too often they don’t make a complaint until it has gone too far,” explained City Council Speaker Christine Quinn. She said many tenants do not notify the city sooner because “they have lost faith in the system.”

Once buildings are identified, a new 10-person Proactive Enforcement Bureau will conduct inspections from cellar to rooftop. Any codes that are violated will be stringently enforced. To ensure compliance, the city will extend the offer of preservations loans and financial counseling, or in extreme cases, demand transfer of ownership.

“The number one reason owners walk away from buildings is because they can’t afford the upkeep of them,” noted Chairperson of the Housing and Buildings Committee, Councilmember Erik Martin Dilan.
Over 100,000 units of affordable housing are predicted to go into foreclosure by 2012, according to Desiree Hunter of the Northwest Bronx Clergy Coalition.

Quinn pointed out that with detailed inspections of distressed buildings, both future owners and the banks that grant them loans will have a clearer understanding of the costs involved in bringing the building up to code before the purchase is made.

“It will provide transparency to the market place,” said Quinn.

“We are working as hard as we can to get people to come into the city to invest,” said Bloomberg.

THE WORST OF THE WORST

The initiative already completed a pilot phase that led to the identification of 4,100 new violations in a test group of 98 buildings. With the success of the pilot, the initiative is now going ahead full force, with 250 buildings already identified for potential intervention over the next six months. Among these buildings are 10 notoriously rundown properties in the Milbank housing complex in the Bronx.

“If you walk into my building, you’d say ‘oh, people live here?!’ … It’s horrible,” said Gloria Thomas, one of the Milbank buildings where she lives. Cracked radiators that release steam have been taken from condemned apartments and put in inhabited units—their installation called a “repair.”
Thomas’s neighbor, Reverend Peter Silva, reported several apartments have not had properly functioning plumbing for a long time.

“Every time you flush the toilet, you have to pour water in the bowl,” said Silva.

“When you walk into my building, the first thing you see are two apartments with big X’s on them,” said Sandra Batalla, another Milbank resident, reporting similarly deplorable conditions. She said glaring red X’s and boarded up windows identify condemned apartments all throughout 1576 Taylor Ave.

“No heat, no elevator, broken windows, lead paint, mold,” Hunter listed off the deplorable conditions experienced by residents in her neighborhood. Though the tenants are hopeful that the new measures will insure better living conditions, their number one concern is that the cost of repairs will fall on their shoulders.

“ARE THEY EXPECTING TENANTS TO PAY?”

The city will offer building owners loans and financial counseling to facilitate bringing their properties up to code, but loans are not gifts. Not only is the city getting stricter about housing codes, a crackdown on loan reimbursement is imminent.

As part of the Proactive Preservation Initiative, City Council will authorize the city to sell liens on owing properties. Enforcement of payment will thereby be left to more aggressive agents.

Under increased pressure to pay, and without the means to do so, some tenants are worried their landlords will raise rent to generate the necessary funds.
Batalla wondered, “are they expecting tenants to pay for the repairs?”

She has already had her rent increased a few times as her landlord claimed he made major capital improvements, which she says were simply repairs to bring the building up to code.

“The idea of a major capital improvement is that he [the landlord] is doing something beyond the call of duty,” said the attorney.

The mayor and the Housing Preservation and Development Commissioner, Raphael E. Cestero, both acknowledged that while protecting tenant rights, the city must continue to make property ownership a lucrative—or at the very least, a marginally profitable—enterprise.

“[The landlords] have to be able to get the return on the property,” said Cestero.