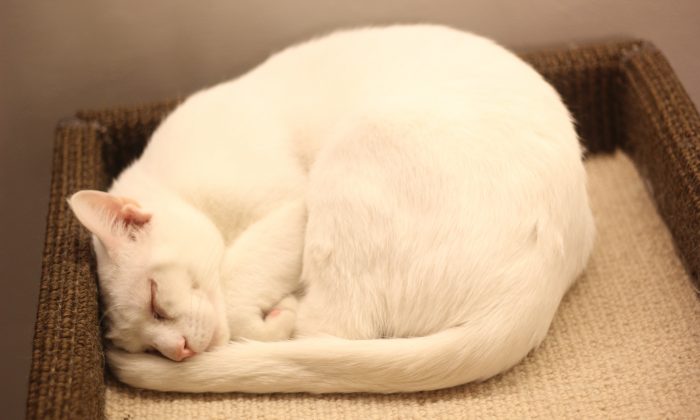 Cupcake taking a nap. He was rescued from a hoarding situation where he was living with 150 other cats. (Vergil Xia/Epoch Times)
Animals

NEW YORK—New York City’s first cat café, Meow Parlour at 46 Hester Street in Manhattan, does more than just provide guests with tea and desserts while in the comfort of cats. It has also partnered up with adoption group KittyKind to give its resident cats a chance to find permanent homes with guests who want to adopt them.

The concept of the cat café was popularized in Japan where many apartments forbid the keeping of pets. The cats at cat cafés provide companionship to people who do not have their own pets at home to relax and relieve their stress with.

The cat cafés in Japan, however, are usually not adoptable. The cats live and are taken care of in the café and remain as regulars for the guests to continue visiting. But this idea was not something that co-founders Christina Ha and Emilie Legrand were in favor of when starting Meow Parlour.

“We wouldn’t do that to our own cats,” said Ha. “They wouldn’t be able to sleep in a bed. They get petted by hundreds of people a day. It can be really overwhelming and it didn’t make sense for us as cat lovers to do that.”

Christina Ha and Emilie Legrand founded Meow Parlour in December 2014. They are pastry chefs at the popular bakery Macaron Parlour, which provides food for Meow Parlour. The concept of having a cat café in New York started as a bit of joke between the two cat lovers after Legrand visited cat cafés in Asia. The joke developed into a full-fledged dream as the two continued their discussion.

The two reached out to cat rescue group KittyKind for a partnership: KittyKind supplies the cats, and Meow Parlour helps connect them with potential homes. Ha had previously adopted a cat from KittyKind and said was impressed with their devotion to making sure their adopted cats were doing well.

To Ha, it was a “no brainer” in choosing KittyKind as a partner.

“We have to go with someone who really cares about their cats,” said Ha in regards to KittyKind’s standard of care.

KittyKind is a non-profit group run by volunteers that takes in homeless or abandoned cats and works to find caring homes for them. Their main adoption center, located at Petco Union Square, works to give cats food, water, a place to sleep, and any necessary medical attention.

“We’re really happy to be partnering with Meow Parlour and they’ve done a lot to get our cats adopted,” said Marie Mundaca, a volunteer at KittyKind. “It’s been a really big success.”

Mundaca says through Meow Parlour, the KittyKind name became even more recognized. This, in turn, leads to more cats getting adopted. According to its website, KittyKind saves and gives homes to over 600 cats a year.

One of KittyKind’s many rescues is a white-furred 3-year-old male named Cupcake. He was rescued from a hoarder situation where he was living with 150 other cats. KittyKind made sure he got medical attention, including getting surgery to remove his ingrown eyelashes. Cupcake is now enjoying his time at Meow Parlour while he waits to be adopted into his future permanent home.

The success and the attention Meow Parlour has achieved far exceeded what that Ha and Legrand expected. The two originally planned on holding events at the cat café, including a yoga session with the cats. But due to the overwhelming number of customers, it became unrealistic to hold events while also attempting to coordinate with guests who wish to adopt a new furry best friend into their family.

“We get really attached to the cats so it’s bittersweet when they get adopted,” said Meow Parlour employee Meghan Smith. “It’s very rewarding working with them and seeing them go into new homes.”

Meow Parlour is reservation-only. Online reservations can be made through its website. When there are cancelations or no-shows, they post notifications via Twitter and accept walk-in guests. All adoptions are coordinated through KittyKind.