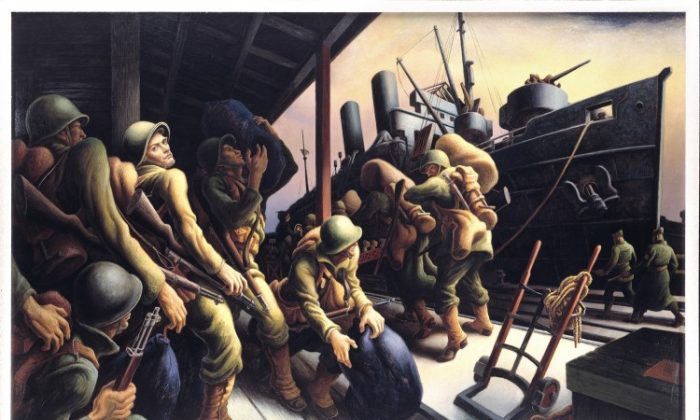 After the passage of the Lend-Lease bill, enabling the U.S. to supply the Allies, New York was a major war material port. Pictured are some of the nearly 100 British, Dutch, and Norwegian merchant ships passing through New York harbor on Sept. 9, 1941. (Courtesy of the New York Historical Society)
US

NEW YORK—A new exhibition at the New York Historical Society illuminates how the New York metropolitan region and its citizens contributed to the Allied victory in World War II.

Beginning in 1941, after the attack on Pearl Harbor, New York became a hub of war activities. Workers in the city did everything from shipbuilding at the Brooklyn Navy Yard to uniform manufacturing at Brooks Brothers.

By the end of the war, New York Harbor had seen 63 million tons of supplies exported to war-torn regions and 3.3 million men leave for deployment. At the busiest times, a ship left every 15 minutes, according to the society.

A massive affair, the exhibition features more than 400 images and objects such as maps, posters, and short films.

The historical society, which is located at 170 Central Park West, is open Tuesday through Sunday. Visit wwii.nyhistory.org for more information.