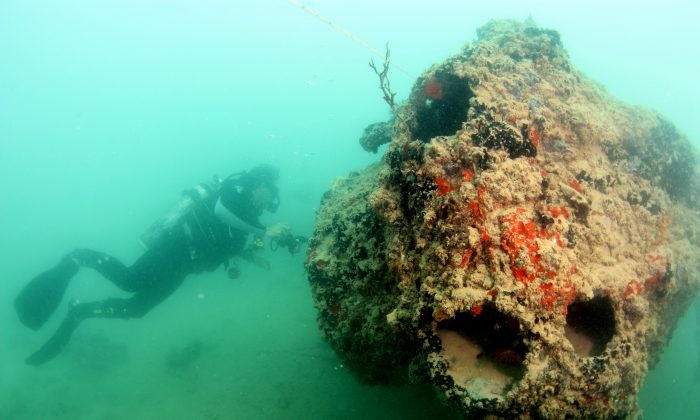 A diver examines the gunner's forward turret on a PBY-5 Catalina resting on its right side. The plane was sunk during the Japanese attack on Pearl Harbor during World War II. (UH Marine Option Program)
US

New images reveal the details of a U.S. Navy seaplane lost in the attack on Pearl Harbor 74 years ago.

The plane was sunk during the opening minutes of the Japanese attack on Oahu on the morning of Dec. 7, 1941. The attack led to the United States’ entry into World War II.


The loss of the plane and 26 other Catalina “flying boats” was significant because the long-range patrol bombers could have followed the Japanese planes back to their carriers. Other seaplanes were widely used during the war.

The photos, from a recent dive conducted by students at the University of Hawaii and led by Hans Van Tilburg, a maritime archaeologist with NOAA’s Office of National Marine Sanctuaries, is the first broad documentation of the site.

The precise identity of the aircraft remains unknown. It rests in three large pieces at a depth of 30 feet, and will not be disturbed because it’s protected by the Sunken Military Craft Act of 2004.

“The new images and site plan help tell the story of a largely forgotten casualty of the attack,” Van Tilburg said in a statement. “The sunken PBY plane is a very important reminder of the “Day of Infamy,’ just like the USS Arizona and USS Utah. They are all direct casualties of December 7.”


“This sunken flying boat is a window into the events of the attack, a moment in time that reshaped the Pacific region,” added June Cleghorn, senior archaeologist at Marine Corps Base Hawaii.

“Understanding this site sheds light on the mystery of the lost PBYs and honors the legacy of the Navy and Marine Corps Base in Hawaii.”