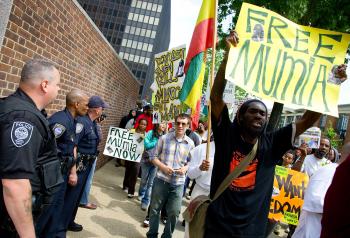 By Carlen Zhang
Print
The federal appeals court ruled that death-row inmate Mumia Abu-Jamal should get a new sentencing hearing, according to Reuters on Tuesday.  The court found that the instructions given to the jury in 1982 could have been misleading.

Specifically, the death-penalty instructions could have caused jurors to believe that they needed to unanimously decide if there were mitigating circumstances, which would spare his life.

In December 1981, Abu-Jamal was convicted of shooting and killing Daniel Faulkner, a Philadelphia police officer. Former Black Panther Abu-Jamal was sentenced to death.

Judge Anthony J. Scirica, as quoted by the Associated Press, stated, “The Pennsylvania Supreme Court failed to evaluate whether the complete text of the verdict form, together with the jury instructions, would create a substantial probability the jury believed both aggravating and mitigating circumstances must be found unanimously.”

According to AP, Abu-Jamal wrote a book in 1995, “Live From Death Row,” describing and condemning prison life. He wrote that the prison system is systemically racist.