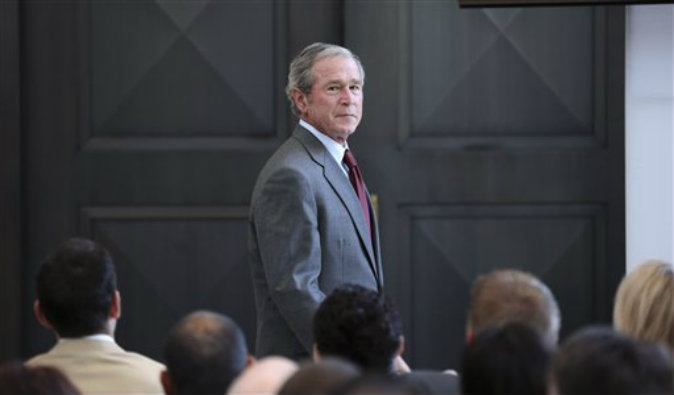 Former President George W. Bush walks off the stage after giving a speech before a U.S. citizen swearing in ceremony at the The George W. Bush Presidential Center in Dallas on July 10, 2013. (AP Photo/LM Otero)
US

The handwritten notes provide the only complete verbatim record of how Bush handled the situation. They were released to mark the 15th anniversary of the attacks.

Bush’s former press secretary Ari Fleischer released six pages of notes he made while Bush and others responded. Bush’s immediate reaction was to seek revenge against the perpetrators.

He told then-Vice President Dick Cheney via telephone: “We’re going to get the [expletives]. We’re at war.” After hanging up, he told his aides: “When we find out who did this, they’re not going to like me as president. Somebody’s going to pay,” according to the Reuters news agency.

President Bush was reading “My Pet Goat” to school children when he learned of the September 11th attack. pic.twitter.com/r03MphDwQb

“I can’t wait to find out who did it. It’s going to take a while and we’re not going to have a little slap on the wrist crap,” he also said, according to Fleischer’s notes.

At one point, Bush’s Secret Service tried to prevent him from returning to Washington, D.C. “I want to get home as soon as possible,” Bush said. “I don’t want whoever this is holding me outside Washington.”

An aide told him: “Our people are saying it’s too unsteady still.”

Fleischer previously used segments of his notes, which is reportedly kept in a bank vault, for several annual commemorative tweets during the anniversary of 9/11. He’s never before released the notes in full to the public. He sent them to Reuters.

Fleischer was with Bush on the day of Sept. 11, 2001, as they visited Booker Elementary School in Sarasota, Florida. A now-iconic image showed an aide informing Bush that planes had crashed into the World Trade Center towers as he was reading to children.

Later, Bush was ridiculed for continuing to read “The Pet Goat” to the schoolchildren after he was informed that the United States had suffered its worst terrorist attack in history. Bush’s defenders made the case he was trying to keep the children calm.

“The President felt he should project strength and calm until he could better understand what was happening,” said a 9/11 Commission Staff Report entitled Improvising a Homeland Defense.

Fleischer also at one point told Bush: “Don’t say anything yet.”

According to the notes, Bush also had another priority. He wanted to make sure his wife, Laura, and two daughters were okay. “Barney?” Bush said when asking about his dog, a Scottish terrier. “He’s nipping at the heels of Osama bin Laden now,” said Bush’s chief of staff Andy Card.