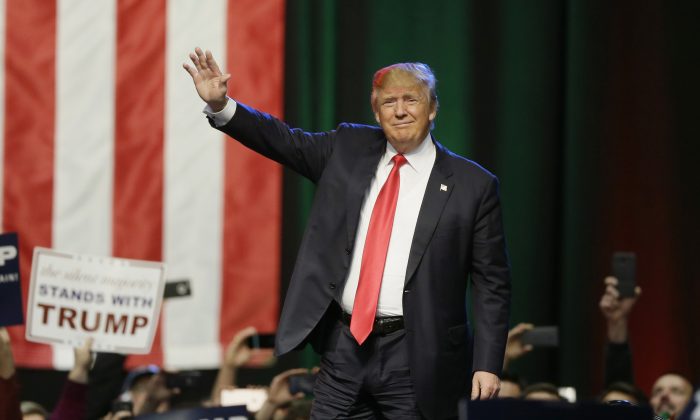 In this Dec. 21, 2015, photo, Republican presidential candidate businessman Donald Trump acknowledges the crowd before addressing supporters at a campaign rally in Grand Rapids, Mich. Months of intense focus on the Republican race, and front-runner Trump, have reverberated through the Democratic field, prompting Hillary Clinton to turn her attention to her would-be GOP challengers and leaving her chief rival, Vermont Sen. Bernie Sanders, gasping for airtime. (AP Photo/Carlos Osorio)
Politics

The New Hampshire Union Leader publisher slammed Donald Trump in a front-page editorial on Monday, comparing him to a dumb movie character.

In the editorial, titled “Trump campaign insults NH voters’ intelligence,” Joe McQuaid said that Trump and Biff from Back to the Future are both bullies.

McQuaid wrote that as Trump is due in New Hampshire this evening, he hopes to convince voters not to vote for the Republican frontrunner.

“Much of the news media are lavishly covering Trump, not just because he’s good for ratings, but because he’s good for Hillary Clinton. They very much want Trump to be the Republican nominee so that Ms. Hillary can move back into the White House,” he claimed, though he put forth no specific alternative GOP candidate to Trump.

“Trump can certainly be an entertaining character. He toys with TV journalists and dismisses critics with name-calling that drives the Politically Correct crowd insane. But his public descent into bathroom humor and verbal bullying has been painful, and educational, to watch.”

The conservative publisher of the New Hampshire Union Leader, in a front-page editorial Monday, says Donald Trump is…

McQuaid called Trump “a crude blowhard with no clear political philosophy,” and said Trump reminds him of Biff.

“Lo and behold, the screenwriter says that he based Biff on Trump,” the publisher wrote. “On Feb. 9, we trust New Hampshire Republicans will send ‘Biff Trump’ back to somewhere — anywhere but on the road to the most important elective office in the United States at a most crucial time for this nation.”

People had mixed reactions to the opinion piece.

“Mr. McQuaid, Your opinions and the opinions of your newspaper are not as influential as they once may have been. The world has changed, nothing stays the same. Maybe you need to open your eyes to who the people want, not who you want,” said one.

“McQuaid hit this one right on the head,” said another.