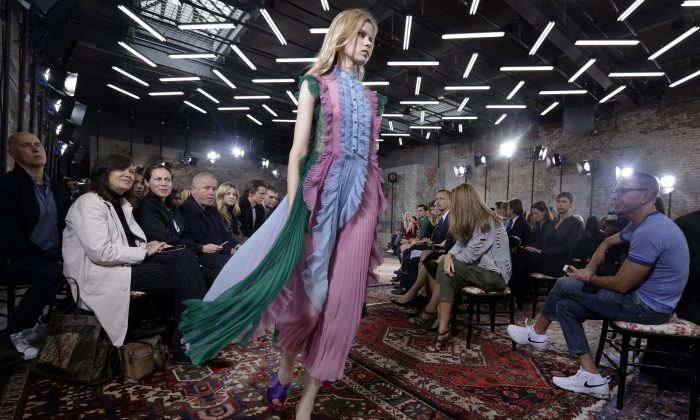 NEW YORK—In florals that matched the comfy chairs for his guests, in cat-eye glasses and dragonflies and bees and tigers and snakes, Gucci’s new creative director Alessandro Michele put on a whimsical, eclectic show for his first resort collection.

Michele—who replaced Frida Giannini after her departure in January—closed a Chelsea street so the models could cross to the other side and enter his industrial space just as rolling metal gates were lifted. He covered floors with inviting oriental rugs.

The shaggy-haired, big-bearded designer in a slouchy white T-shirt, bracelets, and fingers full of rings, greeted guests with warm hugs and a laugh. He said this collection, coming soon after his February debut in Milan, was focused on individual style.

“It’s a kind of personal eccentricism,” he said in a post-show interview. “It’s a mix from the past and the present and from the soul, so you can believe in the way you dress,” he said. “Everything matches together in a beautiful way in my mind.”

Prepster stripes represented (on a silver bomber jacket he paired with an emerald green lace dress). So did ’70s disco. Western-style touches added to his mix.

One cozy stripe coat was decorated with silver sparkle dragonflies and another was quilted in pale pink, trimmed with fur at the cuffs and worn with a Betty Draper scarf around a model’s head. Some dresses flowed in tiers of ruffles while others were neatly pleated.

“It’s about that feeling when a beautiful woman wears something that you do not expect,” Michele said.

Has Michele, who has toiled for Gucci for 12 years, settled into his new role as creative director? He said he’s getting there.

“Not quite relaxed,” he laughed. “For a big company like Gucci, it’s never-ending.”

“He’s just getting started but he’s really put his own stamp on who the new Gucci girl is. It’s exciting,” he said.

Altuzarra said Michele is “evolving the language of the house in a really interesting way, in a way that feels really fresh.”