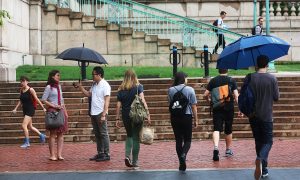 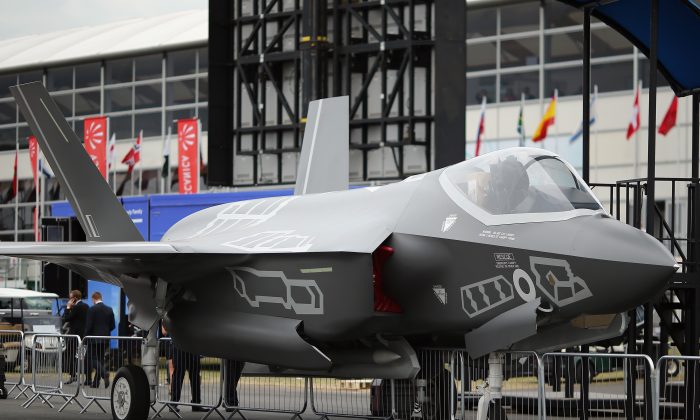 A model of a Lockhead Martin F-35 on display during an airshow on July 16 in Farnborough, England. A Chinese national is being charged in the United States for allegedly stealing and trying to transfer new F-35 designs to China. (Dan Kitwood/Getty Images)
China

The Chinese regime nearly got its hands on new designs for America’s latest fighter jet. New designs that could cut costs in producing the F-35 advanced fighter jet were found in the luggage of a Chinese national who was traveling from New York to China.

Yu Long, 36, was charged in a Bridgeport, Conn., court on Dec. 9 for attempting to travel to China with documents he took from an unnamed major defense contractor in Connecticut where he worked.

The sensitive documents Yu was caught with on Nov. 6 contained “detailed equations and test results used in the development of technologically advanced titanium for U.S. military aircraft,” according to a press release from the U.S. Attorney’s Office.

The designs for the “advanced titanium” were being developed in cooperation by two major defense contractors, including the one Yu worked for, under a request from the U.S. Air Force to “see whether they could collectively lower the costs of certain metals used.”

The research is significant. The high cost of the F-35 fighter jet, estimated at up to $337 million each, has been one of its biggest controversies—not only for the U.S. military, but also for U.S. allies approved to purchase the jet.

China would have clear interest in Yu’s files for several reasons, the largest being that the Chinese regime stole U.S. designs for the F-35 in 2007, and sensitive technology from the F-35 program has appeared in recent versions of China’s J-20 fighter jet.

Before his arrest, Yu had taken several trips to China—which is not unusual, given that he’s a Chinese citizen. But what was unusual is that when he returned from a recent trip on Aug. 19, he was found with $10,000 in undeclared cash, registration documents for a new corporation in China, and according to the press release “a largely completed application for work with a state-controlled aviation and aerospace research center in China.”

So, in short, Yu was already striking deals with the Chinese regime for aerospace development, and had already registered his own business in China for that venture.

Even more important was what the documents Yu had with him stated. According to the press release, the application materials he had on Aug. 19 highlighted his “work history and experiences that he claimed to have obtained” while working at the U.S. defense contractor.

Yu’s experience with the jet engines would have also been appealing to the Chinese regime. Its inability to create modern-generation jet engines has been one of the core roadblocks in its programs to develop and sell fighter jets. China still imports its jet engines from Russia.

Yu is facing charges for “transporting, transmitting, and transferring in interstate or foreign commerce goods obtained by theft, conversion, or fraud,” according to the press release. He faces up to 10 years in prison and up to $250,000 in fines.

The investigation into his case is being led by the FBI in New Haven, in coordination with Homeland Security Investigations in New Haven and in Newark.