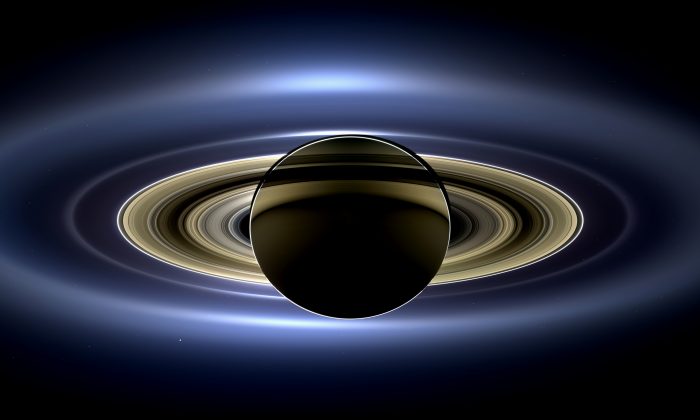 On July 19, 2013, in an event celebrated the world over, NASA's Cassini spacecraft slipped into Saturn's shadow and turned to image the planet, seven of its moons, its inner rings -- and, in the background, our home planet, Earth. (NASA/JPL-Caltech/SSI)
Science

New Cassini photos were released by NASA this week, showing Saturn and its rings as it eclipses the sun; 141 new photos were taken in July by Cassini to form a mosaic of the planet.

The mosaic image also shows Earth and Venus far off in the distance.

NASA, in a press release, explained that the new image is a “natural-color portrait that is first to show Saturn, its moons and rings, plus Earth, Venus and Mars.”

The photo encompasses about 405,000 miles across Saturn and its rings, which appear backlit by the sun. It added that the mosaic shows a view as it would be seen by human eyes.

“This mosaic provides a remarkable amount of high-quality data on Saturn’s diffuse rings, revealing all sorts of intriguing structures we are currently trying to understand,” Matt Hedman, a Cassini participating scientist with the University of Idaho in Moscow, said in the release. “The E ring in particular shows patterns that likely reflect disturbances from such diverse sources as sunlight and Enceladus’ gravity.”

Cassini was launched 16 years ago and became the first probe to enter Saturn’s orbit in 2004.

“With a long, intricate dance around the Saturn system, Cassini aims to study the Saturn system from as many angles as possible,” stated Linda Spilker, Cassini project scientist at NASA’s Jet Propulsion Laboratory in Pasadena. “Beyond showing us the beauty of the Ringed Planet, data like these also improve our understanding of the history of the faint rings around Saturn and the way disks around planets form — clues to how our own solar system formed around the sun.”

NASA, however, does not attempt to take many photos of Earth using Cassini because the Earth and the sun are too close. Taking a photo of our planet would “damage the spacecraft’s sensitive detectors,” it said.