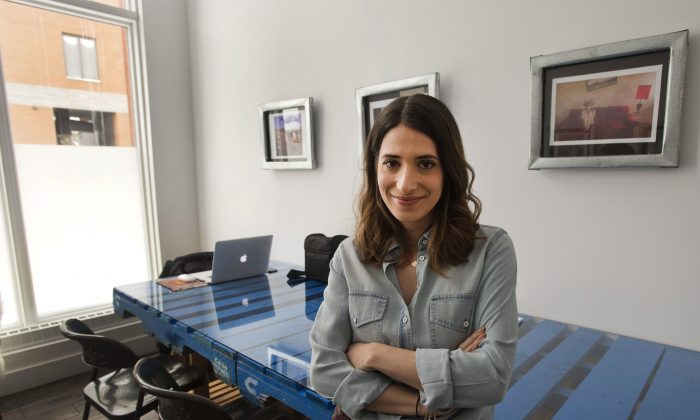 Sarah Lazar, a freelance graphic designer, in her rented office space in Montreal on Feb. 9, 2015. Breather, a mobile app that allows users to rent private workspace by the hour, hopes to capitalize on the steady movement of people into the ranks of the self employed or working from home. (The Canadian Press/Ryan Remiorz)
Canada

TORONTO—Sarah Lazar, a self-employed graphic designer, can’t afford to rent a workspace on a permanent basis. But the 26-year-old Montreal resident needs somewhere to regularly meet with clients and her last attempt at holding a business meeting in a coffee shop proved frustrating.

“There was nowhere to sit,” Lazar recalls. “There were people coughing up a lung … I was just so uncomfortable.”

Breather, a mobile app that allows users to rent private workspace by the hour, hopes to capitalize on the steady movement of people into the ranks of the self employed or working from home.

The service is available in Montreal, Ottawa, San Francisco and New York and will soon be launching in Toronto. So far, the site has about 50 locations and expects to have 200 spaces listed by July.

While the concept has started to gain steam in the U.S., Breather is one of the only apps to rent professional workspace by the hour in Canada.

While the concept has started to gain steam in the U.S., Breather is one of the only apps to rent professional workspace by the hour in Canada.

With Breather, users can rent a small workspace, usually in a downtown building, for rates ranging from $15 to $40 per hour depending on the city, the space and the time of day. The office spaces are furnished and equipped with Wi-Fi.

A temporary code to unlock the office door is sent to the user’s phone about 15 minutes before the reservation time.

It’s a familiar process for anyone who has ever used their smartphone to book a vehicle through car-sharing service Car2Go.

“I think of the phone as the key for everything,” says Julien Smith, one of the company’s two co-founders. “Some people call it the remote control for your life.”

Smith first jotted down the concept for Breather on a cocktail napkin while waiting for a friend at a bar in the spring of 2013. Since then he’s managed to raise more than $7 million in venture capital from firms such as Montreal’s Real Ventures and RRE Ventures, which has backed startups like BuzzFeed, the video-sharing service Vine and 3D printing company MakerBot.

For the past few years Smith has been steadily building a network of workspaces by seeking out underutilized rooms in office buildings. The landlord typically retains ownership of the space, and profits are split between Breather and the property owner.

Offices Have Many Uses

While the majority of Breather’s clients use the spaces for work, the offices have been used in less conventional ways as well, says Smith, such as by executives catching a nap between business flights or taking a break to breastfeed a baby.

Lazar, who runs a design firm called Cow Goes Moo, says Breather gives her access to creatively inspiring spaces that she couldn’t afford to rent on a full-time basis.

“I can’t have an office that beautiful. I can’t afford all the stunning furniture in there,” said Lazar, who has been a frequent client for the past few months. “It’s nice to go there for a few hours and pretend like it’s mine.”

A recent report on emerging trends in real estate by PwC predicts the office space industry will be “turned upside down” by the emergence of the sharing economy, in which people, especially millennials, borrow cars, beds, and other goods instead of owning them.

The success of Airbnb, an online community that allows users to rent out a portion of their homes for short-term stays, and ride-sharing service Uber are a testament to the popularity of the “collaborative consumption” model.

The concept can be profitable for landlords, allowing them to generate cash from vacant units. In many cases, renting out space by the hour fetches higher returns than long-term tenants would, says Smith.

Some of the spaces Breather has acquired in Manhattan used to rent for around $50 to $70 per square foot, says Smith. Now, they consistently bring in around $200 per square foot.

However, it remains to be seen how sustainable the concept will be over the long term, and finding vacant space in red-hot real estate markets has been a challenge.

“At the very beginning it was very hard to get space,” says Smith. “Now it’s turning around. People are offering us a lot of space and we’re able to be really selective about what we accept.”