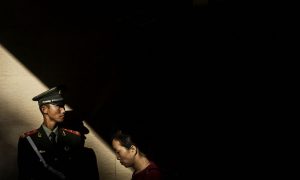 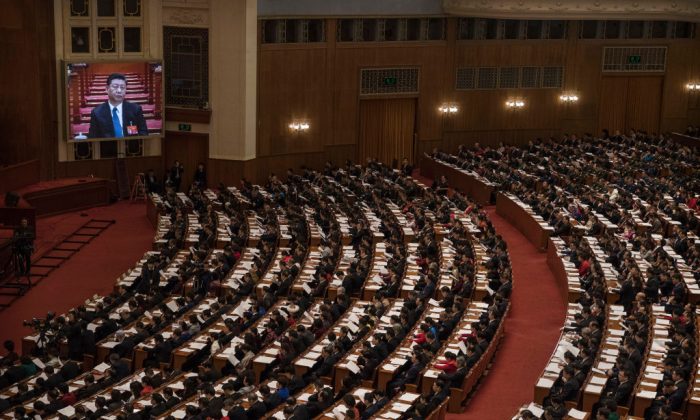 Chinese President Xi Jinping is seen on a screen as delegates look on during the third plenary session of the National People's Congress at The Great Hall Of The People on March 12, 2019 in Beijing, China. The annual Two Sessions gathering of Communist Party officials and delegates lays out a road map for the governments year ahead, including economic growth targets, diplomacy and military spending. (Kevin Frayer/Getty Images)
China

The Chinese Communist Party’s annual “Two Sessions,” or Lianghui, meetings are still underway, when the rubber-stamp legislature and its advisory body formally approves laws and agendas that the Party leadership has already established.

Despite the heavy censorship during this politically sensitive time, a number of online articles mocking the meetings have been widely circulating. One such article has captured many netizens’ attention with the title, “The representatives themselves are problems, how can we expect them to solve problems?”

It went on to say that more food and drug safety scandals have erupted in recent years, while the population ages rapidly, leading to a series of social problems.

The author raised the question of whether the delegates to the National People’s Congress—so-called “representatives”—could truly tackle these issues. Chinese state media portray the Two Sessions meetings as a time for delegates to discuss regulations and laws.

But the author concludes that they cannot solve the country’s problems “because they are the problems themselves.”

“They are the root cause of this deformed society. Think about it. How did they come about? Are they elected by the people? No. Do they meet the people’s expectations? No. They are all carefully selected from different levels and appointed by local bosses,” the article said.

“They have common traits: they are obedient, docile, know how to sing praises, kiss up to others, and understand the mindset of top level officials. They can bow and kowtow anytime,” the article concluded.

The blunt and honest assessment of China’s rubber-stamp legislature drew approval from netizens.

In addition, a post featuring a photo of Shen Jilan, a 89-year-old woman who has been a delegation to the National People’s Congress since 1953, went viral. Shen is known for never missing a session since 1953. She has also never cast a “no” vote to any proposal in the past 65 years.

The text accompanying Shen’s picture read: “She voted yes to the proposals of ‘The Great Leap Forward’ [a political campaign that caused widespread famine]…the Cultural Revolution, the decisions to crack down on Liu Shaoqi [top official who was later purged by Party leader Mao Zedong] and Deng Xiaoping [also purged under Mao].

Then in later years, she voted yes to the proposals of negating the Great Leap Forward, negating the Cultural Revolution, redressing Liu and Deng. The whole purpose of her life is to say yes to the Party’s policies.”