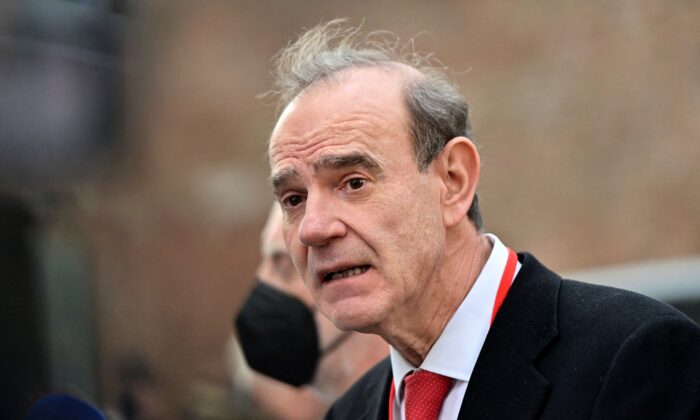 Deputy Secretary General of the European External Action Service (EEAS) Enrique Mora speaks to journalists in front of the Coburg palace after a meeting of the Joint Comprehensive Plan of Action (JCPOA) in Vienna, Austria, on Dec. 3, 2021. (Joe Klamar/AFP via Getty Images)
International

Negotiations to Revive 2015 Iran Nuclear Deal to Resume Next Week

The eight-round of talks aimed at salvaging Iran’s tattered 2015 nuclear deal will resume on Dec. 27, the European Union’s coordinator of the talks confirmed on Thursday.

“Welcome to the 8th round,” Spanish diplomat Enrique Mora said on Twitter, noting that the continuation of negotiations will be held on Dec. 27 in Vienna, Austria.

“The #JCPOA Joint Commission will meet to discuss and define the way ahead,” he added, using the acronym for the deal, the Joint Comprehensive Plan of Action. “Important to pick up the pace on key outstanding issues and move forward, working closely with the [United States].”

Mikhail Ulyanov, Russia’s permanent representative to the Vienna-based international organizations, said in a statement it usually isn’t very popular “to engage in serious business” during Christmas and New Year, but negotiators don’t want to waste time and instead aim at the speediest restoration of the deal.

The European Union’s foreign service said the meeting would be attended by representatives of China, France, Germany, Russia, Britain, and Iran.

“Participants will continue the discussions on the prospect of a possible return of the United States to the JCPOA and how to ensure the full and effective implementation of the agreement by all sides,” the External Action Service said in a statement.

The United States has been participating indirectly in the talk because Iran refuses direct contact.

Iranian foreign ministry spokesperson Saeed Khatibzadeh told a news conference on Dec. 20 that Iran has had no direct communication with the United States during ongoing talks in Vienna, though “some messages have been received” via Mora.

Khatibzadeh also accused the United States of being “formally responsible for the situation today,” blaming then-President Donald Trump as the “main culprit in this situation.”

Trump in May 2018 withdrew the United States from the nuclear pact and reimposed sanctions on Tehran, in an effort to force the country’s ruling Islamic regime to change a plethora of activities that the Trump administration said were unacceptable.

President Joe Biden has signaled that he wants to rejoin the deal. The Biden administration has kept in place all Iranian sanctions it inherited from the Trump administration.

A year after the United States left the 2015 deal that also included France, Britain, Germany, Russia, and China, Iran began violating nuclear restrictions outlined in the deal, moving the country closer to developing the capacity to acquire a nuclear weapon, raising concerns about what the country is doing out of view.

The 2015 Iran nuclear deal, also called the JCPOA, requires Iran to restrict its nuclear program in return for the lifting of economic sanctions from the United States, the EU, and the United Nations.