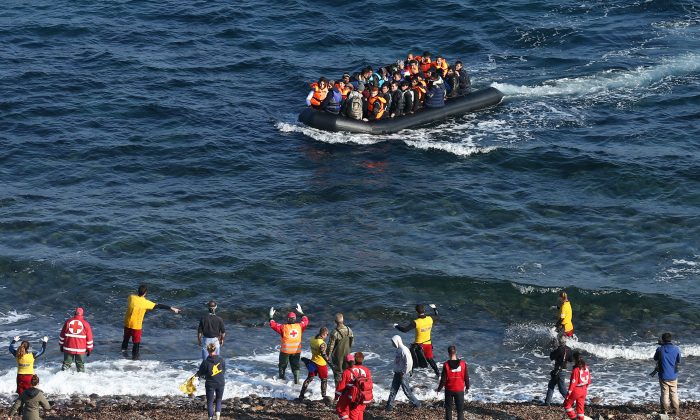 Aid workers gesture at a migrant boat as it approaches shore after making the crossing from Turkey to the Greek island of Lesbos on November 17, 2015 in Sikaminias, Greece. (Carl Court/Getty Images)
Europe

Greek authorities warned that it’s “nearly impossible” to detect jihadists among migrants coming into Europe or the United States without prior intelligence.

“If they are not already registered in the database, it’s nearly impossible,” Dimitris Amountzias, the police captain in charge of Moria–the main registration camp on Greece’s island of Lesbos. He was quoted by the AFP news agency as making the comments.

Dozens of migrants, refugees, and others get in line to give their fingerprints, have their photo taken, and get quizzed by European authorities. According to AFP, the jihadists have been able to easily bypass the seemingly detailed security checks by the European border agency.

Ahmad al-Mohammad was identified as a terrorist only after the fact. His fingerprint was taken when he passed through the processing center in Greece. He was considered a fleeing refugee.

Another European official said, “In any event, this proves that the unchecked flow poses an unequalled challenge for European security. We simply don’t know who is coming through,” according to AFP in another report.

At least two of the suspects in the Paris attacks on Nov. 13 passed through Greece posing as refugees fleeing war in Syria, French prosecutors said last week, according to France24. One of the attackers had “been formally identified as being the individual whose handprints correspond to those of the check in Greece,” Paris prosecutor François Molins revealed.

And the mastermind of the attacks, Belgian national Abdelhamid Abaaoud, came into Europe through Greece and traveled back to Syria from Europe without being noticed, the French authorities added. He was killed in a pre-dawn raid last Wednesday on an apartment in Paris suburb Saint-Denis.

The claim he traveled from Syria to Europe and back again was denied by the Greek government on Friday. “Until today, no source has provided any evidence to confirm this claim,” the Greece citizen’s protection ministry wrote in a statement.

French Prime Minister Manuel Valls warned Thursday that the whole Schengen zone system could be “called into question” if the European Union didn’t “take responsibility” over security of its external borders.

He said the Paris terrorists “took advantage of the refugee crisis…of the chaos, perhaps, for some of them to slip in” to France, France24 reported.

But Valls acknowledged that the perpetrators were closer to home.

“Others were in Belgium already. And others, I must remind you, were in France,” he said.