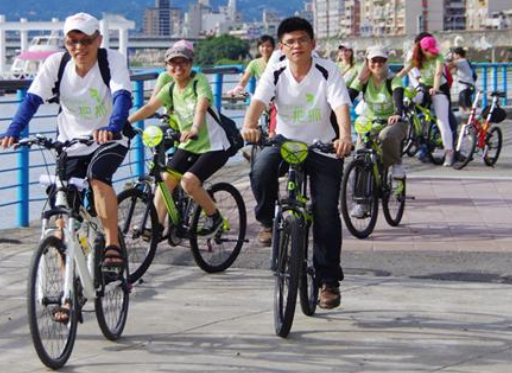 The weather was excellent on July 19th and NTCU Alumni Bicycle and Tea Club chose the day to have its joint event at Dadaocheng Wharf in Taipei City.

According to Li Ke-Sheng, current chairman of the Bicycle Club, in addition to the university celebration and reunion events, NTCU alumni clubs such as the mountain climbing club, bicycle club and tea club would take turns organizing events in order to create a platform of recreation and socializing for the alumni.

The event involved participants setting out from Dadaocheng Wharf in two groups: one to take the boat and the other to head out to the Huajiang Wharf on bicycles. The two groups would meet there and enjoy refreshments whilst taking a break, and on the return trip both groups would switch their means of transportation.

The activity was designed for participants to enjoy the experience of idly sipping tea and chatting on the boat, followed/preceded by a healthy ride on a bicycle whilst appreciating the scenery along the Tamsui river.

Extraordinary Microscience (EOM) was the sponsor for the event and in addition to giving out moisture wicking shirts (in the dual colors of white and green) to every participant, EOM President Kuo Min-Huang also brought a total of 15 Gripfast stem shock absorbers (a small yet exquisite shock absorption device) to the event for participants to try out the shock absorption performance of the product on an actual ride.

Before setting out, EOM held a small “Gripfast DIY Competition” for four participating members of the event. The activity was meant for participants to actually perform the installation of Gripfast on their bicycles and A-Feng, the only female participant in the competition, emerged as the winner.

According to A-Feng, who installed Gripfast on her bike for the very first time, “It was really easy; actually much easier than I thought it would be.”

As the event came to its conclusion at nightfall, the participants were treated to the breathtaking scenery of the Dadaocheng Wharf with the reflection of the city’s illumination on the water. All participants thought the event was well planned and they gratefully thanked President Kuo for the opportunity to try out Gripfast.

President Kuo also commented that in the near future, EOM will try to create more opportunities for cyclists to learn about this innovative product through different activities.

Thoughts on the experience: Riding casually whilst enjoying the scenery along the way

Mr. Jian, who cycles and swims regularly as a hobby, took his own bicycle to participate in the event. He commented that he was used to feeling the vibrations from the road directly on his shoulders when riding and the sensation has led him to adopt a lower riding posture. But with Gripfast installed, he said “It felt as if the shocks were absorbed right at the handlebar and with the front set elevated I could easily enjoy the scenery along the route.”

A wonderful product for urban cyclists

Being an experienced cyclist, Mr. Gao commented that with Gripfast installed, the suspension felt much softer, as if he was riding on a soft cushion. He also noted that the effect was especially apparent on uphill climbs and downhill sections, and the product is perfectly suited for urban cyclists who are wary of the potential numbness or wrist injuries that cycling may cause.

The bicycle is noticeably more stable when braking

After trying out Gripfast, Ms. Zhang commented that the difference was very significant; the ride was much more stable with noticeably fewer vibrations and that when braking, the decrease in momentum was much gentler as the speed was steadily reduced. Mr. Zhuang (husband of Ms. Zhang) who also took part in the event, noted that although most of the road surfaces for the event were even, upward and downward slopes would still cause bumpiness and cyclists would benefit from improved maneuverability with Gripfast installed and have significantly fewer vibrations on uneven surfaces.

Seriously considering buying one for personal use

A friend of the participants

According to his own account, as he has been cycling on road bicycles, he is familiar with the feeling of vibration on his hands and wrists. After trying out the product, he noted, “It felt much more comfortable when I rode on uneven surfaces as I did not feel direct vibrations on my hands”. He also added that he would seriously consider buying Gripfast for himself if the product fits on his bike.