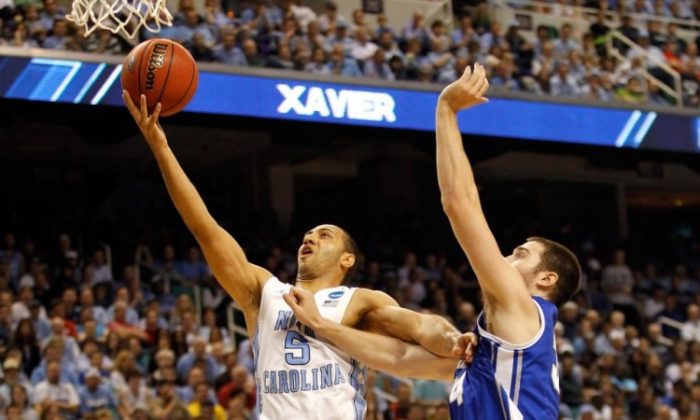 Kendall Marshall (L) is not only second in the NCAA in assists at 9.8 per game, he had averaged 14.8 points per game over his last six games. (Streeter Lecka/Getty Images)
College Sports

Friday night brings the second day of the Sweet 16 round and with that, some more intriguing matchups. Here we’ll break down the games and offer a prediction. Onto the previews:

South Region Game One, 7:15 pm, EST: (3) Baylor (29-7) versus (10) Xavier (23-12)—That Baylor is even in position to make the regional finals for the second time in three years is amazing considering where the program was after the severe sanctions levied against the Bears that hampered recruiting when current coach Scott Drew took over in 2003.

This season the talented Bears, featuring among others former five-star prospects Quincy Miller and Perry Jones, have been a consistent team to predict. While their record against Kansas and Missouri, the best of the Big 12 and toughest teams on their schedule, was just 1-5 they won the games they were supposed to going 28-2 against everyone else.

In their one win against Kansas two weeks ago, guard Brady Heslip proved to be the difference, hitting four of six 3-point attempts. Heslip followed that up with four 3-pointers against Missouri, five in their NCAA tournament opener against South Dakota State and then nine against Colorado to power the Bears in to the Sweet 16.

Xavier counters with good guard play of its own from senior Terrell Holloway and Mark Lyons who rank No. 1 and 2 on the team in scoring at 17.4 and 15, respectively.

The team has rebounded nicely from the December brawl against Cincinnati. Following that in-game fight the then-eighth-ranked Musketeers suspended four players a total of 11 games. Xavier proceeded to lose five of its next six games and drop out of the polls, but rebounded in time to make the tournament.

As long as it keeps Heslip from having another career day, they are a more mentally tough team and should pull off the upset. Prediction: Xavier 77, Baylor 73.

Midwest Region Game One, 7:47 pm, EST: (1) North Carolina (31-5) versus (13) Ohio (29-7)—There’s really one major factor that will determine how far this talented Tar Heels team goes this postseason and that is the right wrist of sophomore point guard Kendall Marshall.

Marshall’s status for Friday, after having surgery Monday to repair a broken bone in his wrist suffered Sunday against Creighton, is still up in the air and will likely be a game-time decision.

Marshall is key to UNC’s success. When he took over point guard duties last season, North Carolina was plodding along at 12-5 and didn’t have quite the offensive spark that a Roy Williams-coached team usually has. With Marshall at the helm, the Tar Heels won 17 of their last 20 games and made the regional finals.

The team has continued its run this season in winning the ACC title and Marshall has again been at the center of it, ranking second in the country in assists at 9.8 per game.

On paper, Ohio would definitely benefit from Marshall’s absence. The Bobcats main strength is perimeter defense ranking fourth in the country (338 teams) in steals per game at 9.3, sixth in turnover margin at 4.2, and 11th in 3-point percentage allowed at 29.3.

Odds are that the left-handed Marshall will play as the injury is to his off-hand. Prediction: North Carolina 79, Ohio 64.

South Region Game Two, 9:45 pm, EST: (1) Kentucky (34-2) versus (4) Indiana (27-8)—The sequel to one of the best played games of the regular season is finally here as the Wildcats look to avenge one of their two losses on the year.

Indiana, which led most of the second half, in that first matchup, but needed a buzzer-beating 3-pointer to win it at the end, put itself back in the national spotlight with the win. Considered one of the country’s top programs, the Hoosiers had failed to make it to the postseason three straight seasons following significant sanctions resulting from former coach Kelvin Sampson’s short tenure.

The Hoosiers have some good, young players, most notably forward/center Cody Zeller who leads the team with averages of 15.5 points and 6.5 rebounds per game.

Zeller totaled 11 points and 7 rebounds in that game against the Wildcats and benefited from Kentucky freshman-sensation center Anthony Davis’s foul trouble. Davis, who averages team-highs of 14.3 points, 10.1 rebounds, and 4.6 blocks picked up his fourth foul of the game with more than 15 minutes remaining in the second half and ended up well below his season average with just six points.

Though Indiana is a good team, it will have Kentucky’s full attention in this one. The player of the year candidate Davis, who missed the front end of a one-and-one free throw opportunity that could have won the first game, will especially be ready to make up for his subpar performance. Prediction: Kentucky 77, Indiana 68.

Midwest Region Game Two, 10:17 pm, EST: (2) Kansas (29-6) versus (11) North Carolina State (24-12)—After pulling off upsets against San Diego State and Georgetown in its first two tournament games the Wolfpack is rewarded with a date against powerhouse Kansas.

As intimidating as the Jayhawks and their 2,067 all-time wins (second only to Kentucky) are, they haven’t been that stellar in the pressure-filled tournament under coach Bill Self, aside from their 2008 national championship.

Last year, Self’s 35-3 squad lost to Virginia Commonwealth in the regional finals and two years ago his 33-3 team was upended by Northern Iowa in the round of 32—hardly the mark of a great program. And these two performances are just a few years removed from its back-to-back first round upsets at the hands of Bucknell and Bradley in 2005 and 2006, respectively.

This tournament the Jayhawks again found themselves playing below the level of their opponent against Purdue Sunday night. Somehow, though, they found a way to eek out a victory in a game they probably didn’t deserve to win.

N.C. State will be a different matchup for KU than the shorter, but faster Boilermakers, though. With post-up forwards C.J. Leslie and Richard Howell a big part of the offense, Kansas will get to keep both big guys Thomas Robinson and Jeff Withey on the court at the same time—something it couldn’t do on defense against Purdue.

Look for bounce-back games from Kansas stars Tyshawn Taylor and Robinson (combined 6/23 shooting against Purdue) in this one as a relieved Kansas plays freer. Prediction: Kansas 78, North Carolina State 68.