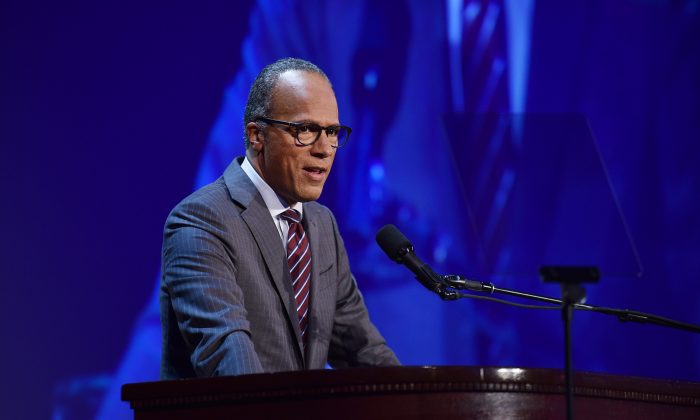 Master of Ceremonies, Lester Holt at the 31th Annual Great Sports Legends Dinner to benefit The Buoniconti Fund to Cure Paralysis at The Waldorf Astoria Hotel on September 12, 2016 in New York City.(Bryan Bedder/Getty Images for The Buoniconti Fund)
2016 race

The first presidential debate between Donald Trump and Hillary Clinton is predicted to have one of the highest viewership numbers in debate history. Hosting the debate is Lester Holt, formerly of “Dateline NBC,” “Today,” and the current anchor of NBC’s “Nightly News.”

Holt replaced Brian Williams on “Nightly News” in June 2015 after NBC suspended Williams following reports of exaggerating his experiences when reporting in New Orleans and Iraq. Following Williams’s permanent removal from his position, Holt got moved up to lead anchor and got chosen as the moderator for the first debate.

In the week leading up to the debate, Holt has already been held under the microscope by both campaigns, questioning his partisanship and his ability to fact-check the candidates.

On the Republican side, Trump went on Fox News’s Bill O’Reilly show on Sept. 19 and when discussing the partisanship of previous debate moderators, claimed incorrectly that Holt was a Democrat:

“TRUMP: And by the way, Lester is a Democrat.

“O’REILLY: I didn’t know that.

“TRUMP: Look, it’s a phony system. Lester is a Democrat. I mean, they are all Democrats. Okay? It’s a very unfair system.”

Trump’s claim that Holt “is a Democrat” was dismissed quickly when journalists looked up his party registration details and found that he is a registered Republican in the state of New York.

Trump’s campaign pushed back when asked whether or not the claim was a lie.

“I don’t think he knew what Lester Holt’s registration was,” Trump’s campaign manager Kellyanne Conway said on MSNBC’s “Morning Joe.” on Sept. 26. “A lie would mean he knew the man’s party registration.”

.@KellyannePolls: Trump ‘didn’t lie’ about Lester Holt, ‘a lie would mean that he knew the man’s party registration’ https://t.co/dZWTCwpoim

In addition to questioning Holt’s partisanship, Trump also unfavorably brought up Candy Crowley, who, in a 2012 debate between Obama and Romney, frequently interjected and argued points with the candidates.

“I mean, you’re debating somebody and if she makes a mistake or I make a mistake, I’ll, you know, we’ll take each other on,” Trump said on the phone with “Fox and Friends” on Sept. 22. “But I certainly don’t think you want Candy Crowley again.”

The Clinton campaign had a different request for Holt: don’t be like “Today’s” Matt Lauer, who was criticized by liberals for the way he moderated the Trump-Clinton commander-in-chief forum earlier this month.

“We’re really focused on this opportunity that Hillary has to speak directly to the voters on the issues,” campaign manager Robby Mook told Politico before turning his attention to Trump.

“But we are concerned that Donald Trump may lie, he may throw misinformation out there, and that Hillary will have to spend all of her time trying to correct the record rather than talking about the things she wants to accomplish,” Mook continued.

Lauer was criticized for not following up with Trump about his stance towards the Iraq war, which Trump has repeatedly said that he was against. According to Politifact, Trump did not publicly denounce the war until a year after it began.

Despite the Clinton’s campaign’s desire for fact-checking, none of the the major news networks are going to be fact-checking the debate in real time which means that the fact-checking will most likely come down to Lester Holt or the candidates correcting each other.

Only Bloomberg TV confirmed that it will be doing on-screen fact-checking during the debate, according to Politico.