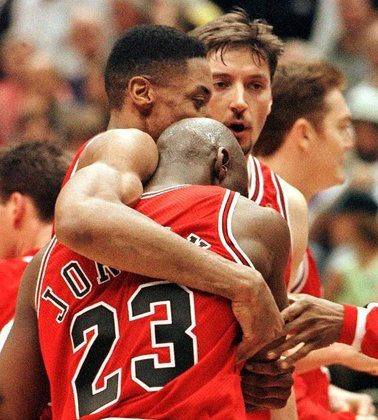 Miller's (R) 25 fourth-quarter points in Game 5 of the ‘94 Eastern Conference Finals against John Starks and the Knicks single-handedly won the game for the Pacers. (Mark D. Phillips/AFP/Getty Images)
NBA

10. Akeem Olajuwon; 1986 NBA Finals, Game 5—”The Dream” proved to be one of the greatest clutch players in NBA history and is most noted for his domination of fellow centers Patrick Ewing, David Robinson, and Shaquille O’Neal in the 1994 and ’95 playoffs. It was in ’86 though when the Olajuwon-led Rockets shocked the Lakers to play the Celtics in the finals that gave the world a preview of what “The Dream” could do. In Game 5, with Houston down three games to one, Olajuwon was at his best. Needing a win to extend the series Akeem (later known as “Hakeem”) put on an incredible performance scoring 32 points, grabbing 14 rebounds, and blocking 8 shots against Boston’s vaunted-frontline to lead the Rockets to a 111–96 win.

9. Tim Duncan; 2003 NBA Finals, Game 6—The 2003 NBA Finals, between defensive-minded foes San Antonio and New Jersey, was not a made-for-TV matchup. But those who saw it, witnessed Tim Duncan at his finest. With the Spurs leading the series three games to two but trailing in Game 6 by as many as 10 in the fourth quarter, Duncan’s three blocked shots down the stretch ignited their comeback that resulted in their second title in five years. Duncan nearly threw down a quadruple-double finishing with 21 points, 20 rebounds, 10 assists, and 8 blocked shots against the likes of Dikembe Mutumbo, Jason Collins, and Kenyon Martin.

8. Larry Bird; 1987 Eastern Conference Finals, Game 5—Three-time NBA Champion Larry Bird had a number of incredible performances and game-winning shots in the postseason. It was one incredible defensive play that single-handedly reversed this series and held off the soon-to-be-great Pistons for one more year. Here was the scene: The series was tied at two games apiece, the Celtics were down a point with seven seconds left when Bird drove to the hoop only to be rejected at the rim and the ball, which went out of bounds, was awarded to Detroit. Detroit guard Isiah Thomas quickly took the ball out of bounds, hoping to catch the Celtics in a state of shock. Instead Bird came out of nowhere to steal Thomas’s inbounds pass and passed to a driving Dennis Johnson for a game-winning layup with one second remaining to win the game. Bird finished with 36 points, 12 rebounds, 9 assists, and one incredible steal.

7. James Worthy; 1988 NBA Finals, Game 7—”Big Game James”‘ Worthy punctuated one of the greatest finals ever with one of the greatest Game 7 performances ever by burning Detroit for 36 points, 16 rebounds, and 10 assists in the Lakers 108–105 series-clinching win. Often overshadowed by Hall-of-Fame teammates Magic Johnson and Kareem Abdul-Jabbar, Worthy’s hot hand throughout the playoffs that season was a boon to the Lakers, which no longer ran its offense through the 41-year-old Abdul Jabbar. Worthy, who led all playoff scorers that year in total points, was named Finals MVP.

6. Michael Jordan; 1986 Eastern Conference Quarterfinals, Game 2—Jordan burst on the scene with an impressive rookie campaign in ’85 but it was his performance against the heavily favored Celtics in ’86 that catapulted him into the category of all-time greats. Boston was 40–1 in the regular season at home that year and would go on to win the title, but not before a scare from Jordan. The 23-year-old hit 22 of 41 shots from all over the Celtic’s home floor, torching Boston defenders with fade away jumpers, mesmerizing dunks, and knee-buckling crossovers. All in all, he scored a still-playoff record 63 points, while garnering praise from the Celtics afterward, in the 135–131 double-overtime classic that Boston ultimately won.