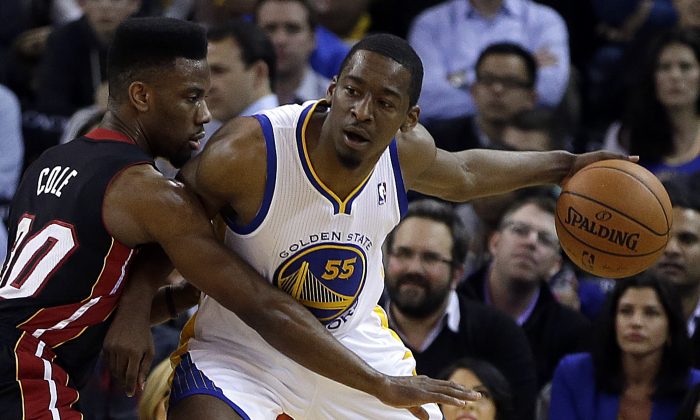 The NBA rumors and news keep coming, mostly about signings and potential signings.

Jordan Crawford, one of the top guards left on the market, could be going to the New York Knicks.

The Knicks are one of multiple teams that are thinking about bringing the 25-year-old on board.

Crawford played well for the Golden State Warriors last year after being traded there from the Boston Celtics, but the team didn’t have room in the rotation after signing Shaun Livingston to a contract in the offseason.

“It wouldn’t be shocking to see him on the Bulls next year, given their apparent dedication to bolstering their scoring. The Lakers would make sense too, given their dearth of backcourt depth and concerns regarding Kobe Bryant’s health. The Mavericks, Knicks, and Nets all have rosters that currently boast at least 15 players so they seem like a less logical destination. There’s still time between now and the beginning of the regular season, and teams are capable of shuffling their roster, so really a move to any of the aforementioned teams wouldn’t be out of the realm of feasibility,” it said.

“I’d be surprised if Crawford isn’t on an NBA by roster by the beginning of the season, as he’s proven throughout his career he can pack a scoring punch off of the bench. He’s lacked efficiency at times, taking too many shots, but his strong, albeit short campaign as a Celtic demonstrated he’s a player with the ability to contribute in a meaningful way. If he’s truly holding out for more than the minimum, and no team offers him an amount greater than that, he’ll have little choice but to simply take what he’s offered.”

The Raptors officially announced the signing of swingman Jordan Hamilton on Monday.

Hamilton was selected in the first round of the 2011 NBA draft and quickly traded to the Denver Nuggets.

He has also played for the Houston Rockets.

CLEVELAND—Shawn Marion wanted another shot at an NBA title. He’ll get it playing with LeBron James.

The free agent forward has agreed to a contract with the Cavaliers, a person familiar with the negotiations said. The 36-year-old Marion informed the Cavs this weekend that he will take a minimum deal and play for them next season, said the person who spoke condition of anonymity because the contract has not been finalized.

Marion also had interest in signing with the Indiana Pacers, who is looking for help after losing Paul George for the season with a broken leg.

The Cavs can only offer Marion a deal worth $1.4 million because they’re out of room under the salary cap.

A four-time All-Star, Marion gives Cleveland another veteran with postseason experience to compliment James, who is returning to the Cavs intent on winning the city’s first pro championship since 1964. The team has previously signed shooters Mike Miller and James Jones, who won twoNBA titles with James in Miami.

Cleveland is also on the brink of adding All-Star forward Kevin Love, who is expected to come over from Minnesota in a trade on or after Aug. 23. While Love gives the Cavs size, another shooter and an excellent passer, he has never played in a postseason game as a pro.

Marion, on the other hand, has played in 103 NBA playoff games. He won a title as a role player with Dallas in 2011 and spent the past five seasons with the Mavericks.

Considered a strong defensive player, he’s averaged 15.8 points and 9.0 rebounds during his career, which began with Phoenix in 1999. Marion was with the Suns for nine-plus seasons and worked with Cavs general manager David Griffin.

To fill out their bench full of sharpshooters and veterans, the Cavaliers want to sign ray Allen.

Marc Spears of Yahoo reported that following the signing of Marion, “thee Cavs are optimistic about their chances of signing free agent guard Ray Allen prior to the start of training camp, a source said.”

Allen has been contemplating retirement but if he does come back for this season most predictions have him joining LeBron at the Cavs.

If Allen signed, the Cavs would have James Jones, Mike Miller, and Dion Waiters at the swingman positions.

Brazil’s Leandro Barbosa, of the Phoenix Suns, shoots a reverse lay up past United States’ Derrick Rose (6), of the Chicago Bulls, during an exhibition game between the US and Brazilian national teams Saturday, Aug. 16, 2014, in Chicago. (AP Photo/Charles Rex Arbogast)

Leandro Barbosa is hoping that his play in the upcoming World Cup will net him a contract with an NBA team.

The 31-year-old, 11-year NBA veteran hasn’t held visits with any team, but is focusing on the upcoming tournament to prove he’s still healthy and good to play.

“I don’t know what owners think about the World Cup, but hopefully I do a great job over there and a team sees,” Barbosa told RealGM.

“I feel healthy and my body is feeling healthy. If I have free agency in my mind, I won’t be able to be myself on the court. Hopefully, I sign a contract and I’ll be happy.”

Barbosa started his work against Team USA over the weekend, and looked pretty good while scoring 13 points along with getting four assists and four rebounds.

The former Orlando Magic guard is expected to sign with the Bulls this week.

But on Chicago blog believes that the Bulls shouldn’t pick up Moore.

Pippen Ain’t Easy says that there are better options out there, including Shannon Brown, Toure Murry, and Chris Douglas-Roberts.

Beasley to Heat Not Likely

Michael Beasley’s potential return to the Miami Heat is probably not happening.

Ira Winderman of the South Florida Sun Sentinel says that it would happen but probably not.

He told a reader recently: “An adjustment still could be made if Beasley is brought back, but that is an increasing longshot.”