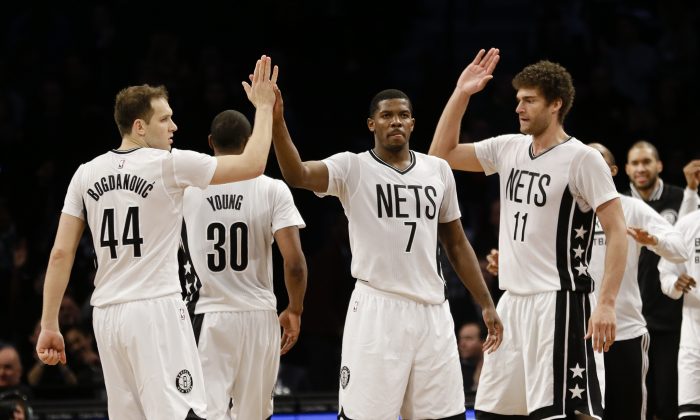 NBA Playoff Standings 2015: Brooklyn Nets One Game Out of Spot

If there’s one thing the past two weeks have taught NBA analysts and fans, it’s that the league is largely unpredictable and things can change quickly.

About a week ago, the Indiana Pacers had won seven straight and were the hottest team coming out of the All-Star break. Many pegged them as a lock for one of the final playoff spots in the East. Now, though, the Pacers have lost five straight, and are as big a question mark as the other teams vying for those spots.

On the other hand, the Brooklyn Nets recently looked removed from the playoff race after losing five straight. But they’ve now won four of their last five and are only one game out of the eighth spot.

Similar changes have happened in the Western Conference, where three teams are battling for the last playoff spot. The Phoenix Suns played horribly after the Brandon Knight and Goran Dragic trades, and appeared to fall out of the playoff race. Several key wins later, the Suns are 2.5 games behind the Oklahoma City Thunder for the eighth spot.

The New Orleans Pelicans, who grabbed the spot for about a day before relinquishing it yet again, have been hit super hard with injuries and have fallen two games behind OKC.

The middle of the pack in the West bears watching closely as well. The Portland Trail Blazers are nowhere near the same team without Wesley Matthews, and are in danger of falling to fifth place of worse. Fortunately for the team, there’s very few games left this season–about 12 for each team–but a prolonged losing streak could hypothetically see Portland in danger of missing the playoffs. They’re currently six games ahead of the Thunder in the loss column.

Back in the East, the Charlotte Hornets and Boston Celtics have also gone cold, with three- and two-game losing streaks, respectively. To make things more interesting, the Milwaukee Bucks have lost five straight, and are in serious danger of being passed by the Miami Heat–who have won three straight and seven of their last ten–and two of the other teams jockeying for position.

Milwaukee has been dreadful since trading Brandon Knight to the Suns, although the team is more focused on the future than this season.

At the top of the East, the Atlanta Hawks have been safe in first place for a while. But the first-round matchup will be critical, as there are several teams that could legitimately knock off the Hawks–the Nets and Pacers.

The last regular season NBA games are slated for April 15. The playoff jockeying should get even more intense in the next few weeks and will make for some thrilling games.