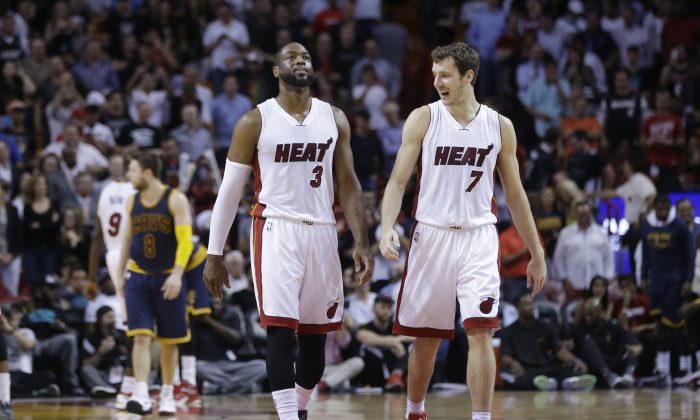 Miami Heat's Dwyane Wade (3) and Goran Dragic (7) walk on the court during the second half of an NBA basketball game against the Cleveland Cavaliers, Monday, March 16, 2015, in Miami. The Heat defeated the Cavaliers 106-92. (AP Photo/Lynne Sladky)
NBA

Just two weeks remain to the NBA’s regular season, and the playoff race is heating up in both conferences.

These positions will most likely hold into the playoffs, although the Bulls, Raptors, and Wizards could shift positions in some way. The real excitement comes from the race for the last three seeds, which has gotten more and more interesting since the All-Star break.

Let’s take a look at the current standings:

Milwaukee looked like it was in serious danger of giving up its long-held sixth spot, but earned crucial wins over the Heat and Pacers last week to create a little breathing room. Still, the margin of error is slim for the Bucks.

The head-to-head matchups between some of these teams will play a large part in determining which ones make the postseason and which ones go home early.

The Nets, for instance, kicked off their current three-game winning streak with a W over the Hornets. And the Heat recently bested the Celtics. Each of these games represents a two-game swing, and culminates in key tiebreakers which could make the difference.

Here’s the remaining head-to-head within those six teams.

Another huge factor in the race? When the teams vying for positions face a much better foe, like the Atlanta Hawks, that has already locked up their position and will be resting players.

The Hornets were fortunate in this regard, when Atlanta sat all of its healthy starters for rest in what turned out to be a win for Charlotte.

Here’s the rest of the matchups with teams that could very well rest at least one starter:

Because of the rest factor, along with the fact that some sub-.500 teams–like the Utah Jazz–are playing much better than other teams, the strength of schedule is largely misleading at this time of the season.

The individual matchups present a better picture. For instance, the Hawks will probably rest players for most of the rest of the games, but likely not against the Nets. Why not? Because Atlanta gets to swap for Brooklyn’s first-round draft pick in the upcoming draft, so will want the Nets to miss out on the playoffs.

The Raptors, likewise, may feel compelled to rest a player or two in some of the games coming up, but not against the Nets, who have developed into one of their bigger rivals after last season’s bitter playoff loss. Some other games could potentially preview playoff matchups

Here’s some of the intriguing matchups left:

Strength of schedule does still count for something, especially when we’re talking about teams like the Knicks, Magic, and 76ers.

Outside of the games listed above in the categories, there are about a dozen other games on the slate.

A fair portion are against the Pistons. Detroit was in the running for a playoff spot but then played horribly for about two weeks. But they’re not in the weaker teams category because they’re playing well again and can definitely be a spoiler.

Here’s the other games left: