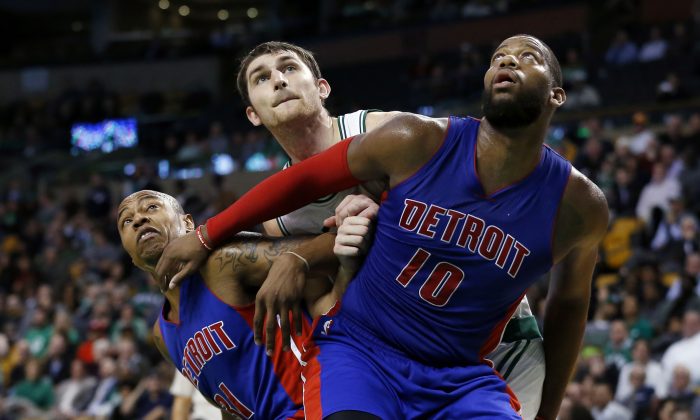 The NBA trade rumors are heating up, but so are the free agency rumors–particularly for teams that are struggling and that will likely miss the playoffs.

Monroe to Leave the Pistons

Greg Monroe is all but certain to leave the Detroit Pistons after this season as an unrestricted free agent.

After negotiations last offseason, Monroe signed a one-year deal instead of becoming a restricted free agent.

The Pistons are in the bottom of the league with a horrible record, just a few games above the Philadelphia 76ers.

Several other teams had pitched sign-and-trade scenarios, but new coach Stan Van Gundy and other managers rejected them.

“When the one-year qualifier was signed, Van Gundy understood Monroe would almost assuredly walk in 2015 free agency, and nothing has changed,” reported Real GM.

“There were a few teams that were serious, but that’s in the past now. The Pistons were very much within their rights to do what they did. It’s a business, so they chose to do what was best for them. Stan’s been great and his NBA track record is proven. He’s had a lot of success in this league,” Monroe said. “For me, I think there’ll be more freedom this time around.”

The blog notes that over a dozen teams should have the necessary cap space to attract Monroe, with the New York Knicks and Atlanta Hawks among the frontrunners.

“To say Monroe has checked out on the locker room may be too harsh, but no one in his position is as fully engaged to a team, a program, as someone who sought and received a long-term contract. For Monroe, this is about being a professional, a steady producer, surviving the year healthy, and likely move on,” the blog said.

The New York Knicks are going to be recruiting hard this offseason, and LaMarcus Aldridge is among the potential targets.

Aldridge was asked about the possibility of signing with the Knicks before the Portland Trail Blazers game on Sunday. Aldridge previously emphasized that the only reason he turned down a contract extension is so he can get the full five-year extension over the summer.

“I’m not even going to talk about it,” Aldridge said, reported the New York Post.

“I went into the season saying I was coming back. I’ll play the season out and go from there.”

Aldridge admitted that he’s heard the pleas from Knicks fans that he come on board.

But he also said that he appreciates the camaraderie with Damian Lillard and other teammates in Portland, where they’ve been under coach Terry Stotts for three seasons now.

Then again, there’s several positives in coming to New York. The team should have a new look around Carmelo Anthony next season thanks to a slew of expiring contracts, and the market in the city has a much bigger national presence than Portland. New York is also in the weaker Eastern Conference.

Another potential free agent high on the Knicks list is Marc Gasol of the Memphis Grizzlies.

But sources told the New York Post that the Knicks understand they likely won’t be able to woo Gasol.

“Filling the center position in the triangle will be the top priority this offseason as the Knicks can lose all of their big men because of expiring contracts. It’s unlikely the Knicks will re-sign any except perhaps Cole Aldrich,” it said.

But Gasol is widely expected to re-sign Gasol, in part because the team can offer him an extra year, and an extra $30 million, on a maximum deal.

“The Knicks’ lone edge is Gasol is best friends with point guard Jose Calderon, his teammate on Spain’s national team,” the Post said.