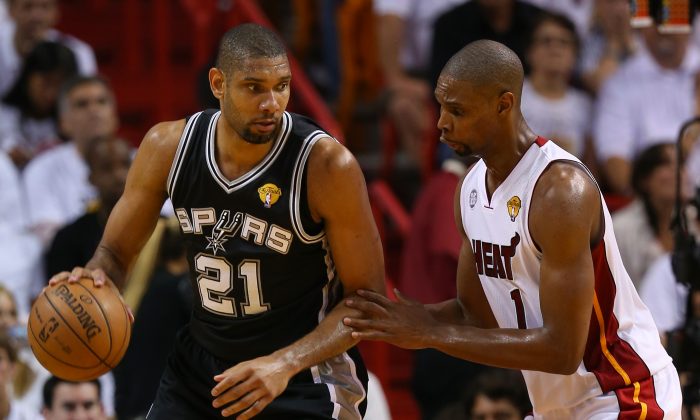 Tim Duncan #21 of the San Antonio Spurs posts up Chris Bosh #1 of the Miami Heat in the third quarter during Game Six of the 2013 NBA Finals at AmericanAirlines Arena on June 18, 2013 in Miami, Florida. (Mike Ehrmann/Getty Images)
NBA

San Antonio increased its lead to 53-44 on the opening possession of the second half as Manu Ginobili finally joined the show with a three-pointer—his first score of the game. The Spurs, which hit 58 percent in the first half, temporarily went cold thereafter though, hitting just one of their next eight shots.

Miami took advantage outscoring the Spurs 12-4 to pull within 57-56 with 6:16 left and seemed on the verge of taking the lead.

The verge was short-lived though as the Spurs responded with an 11-0 run to go up 12 with 4:31 left and ended the half with the double-digit lead.

Tim Duncan continued his personal onslaught with 5 more points and 6 rebounds in the third, to give him 30 and 14 for the game. He’ll surely be Finals MVP should the Spurs hold on.