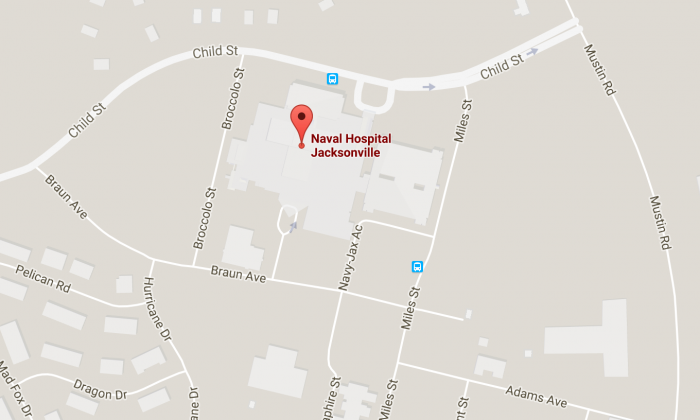 The location of the Naval Hospital Jacksonville. (Screenshot Via Googlemaps)
US News

WARNING: Some people may be disturbed by the following images.

The hospital employees who posted disturbing photo’s with newborns on Monday, Sept. 18, have been removed from their positions at the Naval Hospital Jacksonville, a military hospital.

The photos—originally posted by the employees on Snapchat were reposted to Facebook by a concerned acquaintance. That Sept. 18 Facebook post has now gone viral garnering over 108,000 reactions and over 277,378 shares as of writing on Tuesday, Sept. 19.

Multiple photos show the alleged employee giving the middle finger to a newborn accompanied by the caption, “How I currently feel about these mini Satans.” The posts also said that the “navy nurse” and her friend made a baby dance to rap music.

Denisa Shellito, the person who re-posted the photos on Facebook said that she knew the suspect and was outraged over her behavior.

“A girl I went to high school with is a navy nurse and this is how her and her ***** friend treat the babies that have just been born. My blood is literally boiling and I want to snitch bc that is someone’s child” Shellito wrote.

“The first pic is her friend who is making the baby dance and she’s playing rap music in the background. I’m LIVID and I’m snitching bc she should get fired from her job but idk how to go about it” she wrote.

Shellito said she re-posted the photos in hopes the girls get reprimanded for their actions.

“I’m just sharing someone’s post in hopes that these childish girls get reprimanded and lose their jobs,” she wrote. “They work at the naval hospital in Jacksonville, FL. Call, email, do whatever it takes to get through to administration!!”

Comments under her post agreed that the naval hospital should reprimand the employees.

Her plea for action was answered not long after her post.

Jeanne Casey, the public affairs officer at the hospital, released a statement on Monday, Sept. 18, over the incident. The statement called the employees actions “outrageous” and that it “cannot be tolerated.”

The hospital said they have identified the staff members involved in the incident and have removed them from their posts in patient care. The full statement can be seen below.

The employees who posted the photos have not been formally identified yet.

The hospital said they will be handled by the legal system and military justice.

The official statement has even gone viral, highlighting just how controversial the nurses’ actions were. As of writing the statement has garnered over 11,000 reactions and over 4,389 shares.