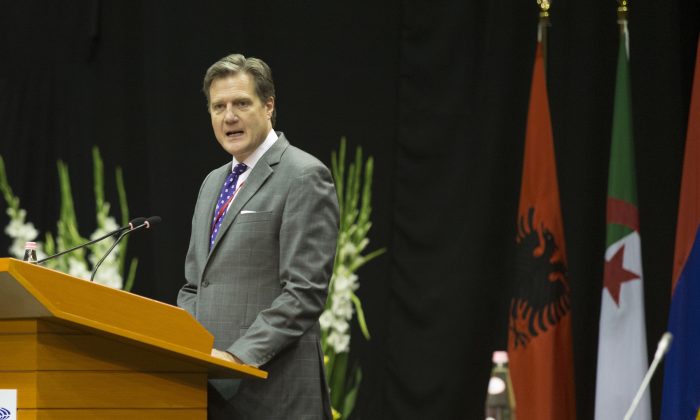 NATO's Parliamentary Assembly President, US Congressman Michael R. Turner speaks at the Spring session urging alliance members to show resolve to Russia's increased military assertiveness and better share the burden of collective defense at the July summit, in Tirana, Monday, May 30, 2016. Some 250 parliamentarians from 28 NATO-member countries and partners have gathered in a three-day session in the Albanian capital, Tirana under tight security measures.(AP Photo/Hektor Pustina)
International

TIRANA, Albania—NATO’s Parliamentary Assembly urged alliance members Monday to stand up to Russia’s military assertiveness and to do a better job sharing the burden of collective defense.

The assembly president, American lawmaker Michael R. Turner, declared that “Russia’s aggressiveness comes with a price” as he appealed to European partners to boost defense spending.

“Moscow has decided that its own interests are better served if it works against us rather than with us,” said Turner, a Republican member of the U.S. House of Representatives from Ohio. “The challenge from Russia is real and serious.”

NATO Deputy Secretary-General Alexander Vershbow said NATO would maintain dialogue with Russia “but there can be no return to ‘business as usual’ … until Russia once again demonstrates respect for international law and the norms of international behavior.”

Vershbow said NATO members would seek to strengthen the alliance’s defense capabilities and logistical support for other allies bordering Russia at an alliance summit in Warsaw in July. He urged members to follow through on their commitment at the alliance’s previous summit to raise defense spending to at least 2 percent of national economic output within the coming decade.

“We are pursuing a twin-track approach with political dialogue, but dialogue from a position of strength,” he said.

About 250 lawmakers from 28 NATO member countries and partners are holding a three-day meeting in the Albanian capital, Tirana, amid tight security. They plan to debate NATO policy on terrorism, mass migration, the Ukraine crisis and security in the Western Balkans.