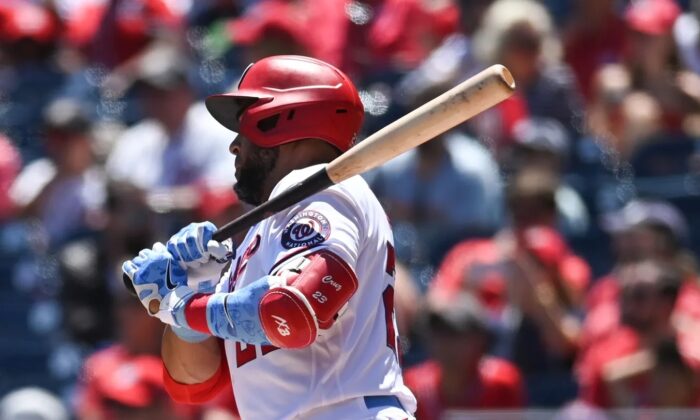 Luis Garcia and Yadiel Hernandez each had three hits for Washington. The Nationals had lost 12 in a row to the Phillies dating back to last season, the team’s longest losing streak against any opponent.

Philadelphia starter Zach Eflin (2–5), who left his last start after 80 pitches with soreness in his right knee, departed after two innings and 38 pitches. He allowed four runs on five hits, and the Phillies did not make an in-game announcement on the reason for his departure.

Matt Vierling had two hits for the Phillies, who had won five straight.

Garcia opened the second inning with a double and scored on Franco’s single. Hernandez doubled, putting runners on second and third. After Lane Thomas grounded out and Cesar Hernandez struck the Phillies opted to pitch to Soto, who hit the first pitch out to right center for his 14th home run.

J.T. Realmuto singled with one out in the fourth and an error by center fielder Thomas, on a ball hit by Odubel Herrera, put runners on second and third. Realmuto scored on a ground out and Bryson Stott’s single made it 4–2.

But Washington got both runs back in its half of the fourth. Cesar Hernandez drove in a run with a double and Nelson Cruz worked a walk with the bases loaded to cut the deficit to 6–2.

Kyle Schwarber singled leading off the fifth for the Phillies and later scored on a throwing error when catcher Keibert Ruiz tried to pick off Nick Castellanos at first.

Franco’s two-run homer in the bottom half of the fifth pushed the Nationals’ lead to 8–3.