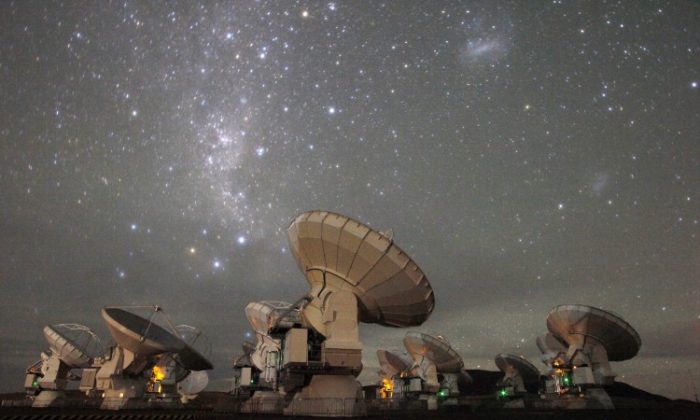 The antennas of the Atacama Large Millimeter/submillimeter Array (ALMA) scrutinize the mysteries of the universe 24 hours a day. ALMA is an international astronomy facility that is a partnership of Europe, North America and East Asia in cooperation with the Republic of Chile. It is funded in part by the National Science Foundation. (ALMA)
Science

The U.S. National Science Foundation (NSF), in collaboration with its Canada and Taiwan partners, Japan, Europe and Chile, inaugurated the Atacama Large Millimeter/submillimeter Array (ALMA) on Wednesday, one of the world’s most powerful telescopes, as part of an international ceremony in Chile.

ALMA comprises 66 antennas that will provide high resolution images of the earliest galaxies in the distant universe, as well as the formation processes of planets circling stars in our own Milky Way galaxy. Scientists from around the world will have the opportunity to explore such objects as they never could before, with an array of telescopes more than 100 times more capable than any previous millimeter arrays.

“NSF is excited to play a major role in ALMA and to foster new opportunities for international collaboration and discoveries at the cutting edge of astronomy,” said Suresh. “ALMA promises to enable transformational research into the origins and evolution of the universe.”

NSF supported the construction of ALMA with $499 million over 11 years and funded 25 of the 66 antennas. The agency’s annual contributions to the operations of ALMA total $34 million.

“We are proud of the U.S contribution to ALMA and the international partnership that has made ALMA possible,” said U.S. Ambassador to Chile Alejandro D. Wolff. “U.S.-Chile collaboration in astronomy dates back to 1849. The data and science gathered from ALMA will build on other U.S. investments in Chile, including the Cerro Tololo Inter-American Observatory, Las Campanas Observatory and Gemini Observatory.”

ALMA is located at an altitude of 16,500 feet in the desert of Atacama, Chile. It sits above 40 percent of the Earth’s atmosphere and virtually all of the world’s water vapor. ALMA is designed to peer into a slice of the electromagnetic spectrum at millimeter wavelengths–light that is closer to a radio wave than to the optical light that is seen by the human eye.

Together with NASA’s future James Webb Space Telescope, ALMA will reveal extraordinary details of the origins of structures in our universe, extending from planets around nearby stars to the earliest galaxies as they formed more than 12 billion years ago.

The National Radio Astronomy Observatory (NRAO), an NSF facility, has led the North American technical and scientific contributions to ALMA. Managed by Associated Universities, Inc. since its inception more than 50 years ago, NRAO has remained at the frontier of radio astronomy research through the conception, development and operation of transformational facilities such as ALMA.