Kitsch and Mystery in Keelung and Jiufen
0 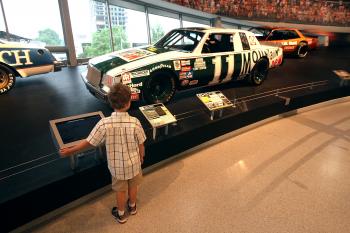 By Ian Ritz
Print
NASCAR opened the doors of its brand new Hall of Fame Tuesday to the delight of racing fans around the nation.

The NASCAR Hall of Fame located in Charlotte, North Carolina, will host a variety of events to commemorate the new facility. One special feature for the opening day was a commemorative ticket that is sure to become a collectors' item in the future.

The first round of NASCAR Hall of Fame inductee nominations was announced last October. Nominees included racing legends such as Richard Petty, Bill France Jr., Dale Ernhardt, and Jumor Johnson. A complete list of inductees is available at www.NASCARHall.com.

Local museums and theaters in Charlotte showed their support for the NASCAR Hall of Fame by offering discounts to anyone who visited the venue. NASCAR fans were able to check out the new hall and then enjoy discounts to other locations, including the Actor’s Theater of Charlotte that held a special show titled “Heaven on Wheels.”

“Heaven on Wheels” was described by the theater as a “stock car racing tribute musical.”