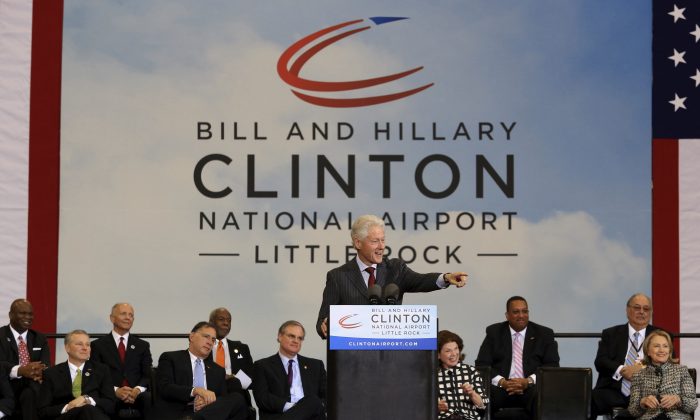 In this May 3, 2013, file photo, former President Bill Clinton speaks at ceremonies in Little Rock, Ark., to dedicate the Bill and Hillary Clinton National Airport. (Staton Breidenthal/The Arkansas Democrat-Gazette via AP, File)
US

Sen. Jason Rapert says pilots have complained to him about flying into Bill and Hillary Clinton National Airport and that Arkansas shouldn’t honor a former president who was impeached over his affair with a White House intern.

“The bill is to prevent any further embarrassment by the airport’s name,” Rapert said Friday. Other women have accused the ex-president and ex-governor of sexual harassment, and they shouldn’t have to be reminded when they travel through Arkansas’s busiest hub, he said.

“How would you feel if you had to walk through that airport?” Rapert asked.

Bill Clinton has been dogged by rumors about his affairs with women for much of his political career. He has acknowledged sexual encounters during that time, but has denied accusations of mistreatment.

The sprawling airport complex east of downtown Little Rock had been called Adams Field, picking up the moniker to honor Arkansas National Guard Capt. George Geyer Adams in 1942. Adams was a longtime Little Rock councilman killed in the line of duty in 1937 and the actual air field is still named for him.

“Political friends of the Clintons decided to strip his honor,” Rapert said.

Bill Clinton, who was acquitted in his 1999 impeachment trial, served as Arkansas governor for nearly 12 years and president for eight. Hillary Clinton was a U.S. senator from New York and a U.S. Secretary of State before running as the Democratic presidential nominee last year.

While Bill Clinton was president, he signed the bill naming Washington National Airport after former President Ronald Reagan, a Republican.

Rapert’s bill says Arkansas should not name any publicly funded airport after anyone who received a salary for holding a federal, state, county or municipal office.

Little Rock’s Airport Commission voted to rename the complex in 2012. At a hearing, members of the public acknowledged the Clintons weren’t perfect but said the couple had accomplishments that no other Arkansans had.

“We recognize that the 42nd president of the United States is a singular honor for the city and the state,” Mayor Mark Stodola, a Democrat, said Friday.

“I’m disappointed that the legislation was filed,” he said, adding that it was “a slap against Little Rock” and that its airport commissioners were best equipped to choose whom to honor.

When the airport was renamed five years ago, Democrats controlled the Legislature and held the governor’s office. Republicans were in control of Arkansas state government by 2014.