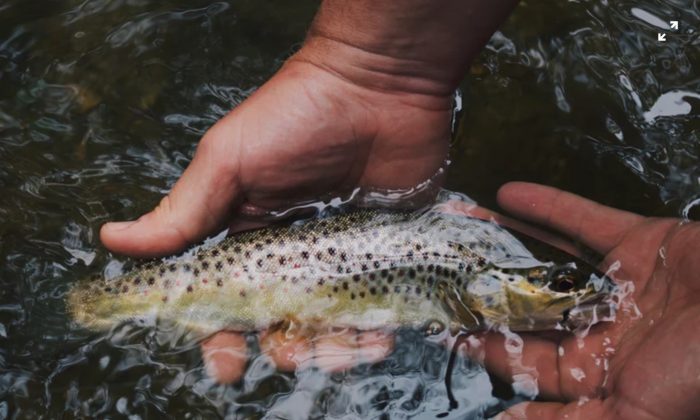 Stock photo showing a fisherman holding a trout in his hands. (Hunter Brumels/Unsplash)
US News

The mystery of a wedding ring attached to the tail of a steelhead trout caught by Illinois anglers has finally been revealed, reports said.

The unusual fish was snagged by a group of fishermen taking part in a tournament on Lake Michigan on Friday, June 21, according to USA Today/For The Win Outdoors.

The trout was reeled in by Joe Penar, the Chicago Sun-Times reported, while on a boat belonging to Jim Nelligan named the “Grey Lion II.”

Nelligan told For The Win Outdoors that when he saw the wedding ring attached to the fish, he was dumbfounded.

“It was crazy,” Nelligan said, according to the report. “We started wondering who did this, and why?”

Nelligan said he first thought it was some kind of tracking device. The Department of Natural Resources (DNR) fisheries biologists sometimes attach tags to track fish for reasons of research.

“When we first saw it we wondered if it was some kind of DNR tag initially,” Nelligan told For The Win Outdoors, adding, “but then we saw it was a wedding ring.”

Nelligan told the Chicago Sun-Times he and his companions suspected an extraordinary backstory to the ring.

“Wonder if it was a divorce or death, but a crazy story,” he told the news outlet.

In a follow-up to the original Chicago Sun-Times story, the news outlet reported on Monday that the owner of the ring—Capt. Jason Rose—had reached out to the publication and shed light on the mystery.

Rose revealed he used a zip tie to attach his wedding band to a steelhead he caught and released on May 4. He said he had been married for nearly a decade when he and his spouse parted ways.

“I am a fishing guide,” Rose told the Sun-Times, adding, “she was always against me following my dreams and hated how much I fished.”

Rose revealed he got divorced about four years ago and wanted to toss the ring as a kind of symbolic closure.

“My life has been nothing less than great since I released it,” he said, joking that he believes the ring may be “cursed.”

The Chicago Sun-Times posted the story on its Facebook page, where it garnered various comments.

“A mystery? What…you think another fish zip tied the ring on there?” one person commented.

“I’m guessing a fresh divorce,” someone else quipped.

The story was also shared on Steelhead Manifesto, a Facebook page for trout fishing enthusiasts, where it sparked a heated exchange of opinions about whether Rose acted ethically by attaching the ring to the steelhead.

“I am anything but a animal activist,” one person commented. “I hunt fish and trap also used to hound. I dont think it’s right for some pervert to be going around ziptieing things to wildlife. Its America tho so to each their own I reckon.”

“When you put your bait in the water attached to a hook you are intentionally hoping to stick that hook in that fish,” someone else contended. “I do it as well, I just don’t get worked up about what other people do.”

“I hunt as well, and while I usually C&R, I not infrequently keep fish to eat,” the commenter wrote. “I also take care to respect my quarry and not take actions unconnected to my sport that will harm those living things and try my best to end a life as humanely as I can given the circumstances.”

“I mean it is kinda cruel yeah,” someone else wrote, adding, “but no one cares that the second guy killed it and it’s in a skillet…. lol so killing them is fine but strapping a ring to one is just absolutely not acceptable.”

The incident recalls the case of a giant and rare fish caught by a fisherman in Minnesota, which experts say may be unusually bright orange in color because of its old age.

Jason Fugate was fishing in the Brainerd Lakes area in April when he hooked the vivid orange Bigmouth Buffalo fish, which weighed in at 33.1 pounds.

“I’ll be honest: I didn’t realize it was orange until I had it in the boat,” Fugate told Fox News.

“When I first saw it, I thought it was something sunken. As I got up closer it swam and came up a little bit and just had that big glow like it was just a big buffalo fish.”

Although Lackmann had seen thousands of photos of the species in the past, he was still stunned when he saw photos of special catch, he told KSTPTV.

“But when I saw the first pictures that Jason sent me I was actually pretty shocked because it was a bright, vivid orange,” he said.

“I had never seen something like that all across the entire body of the fish. So it was really striking and it surprised me, even though I’ve looked at thousands of Bigmouth Buffalo over the past eight or nine years.”

Lackmann said he believes the fish was of extraordinarily old age.

“We know this fish is a centenarian, more than 100 years old, one of the oldest we’ve ever seen,” Lackmann told KSTPTV. “The oldest we’ve documented in our paper was 112 years old. We just cannot reveal the exact age at this time because it needs to undergo further analysis.”