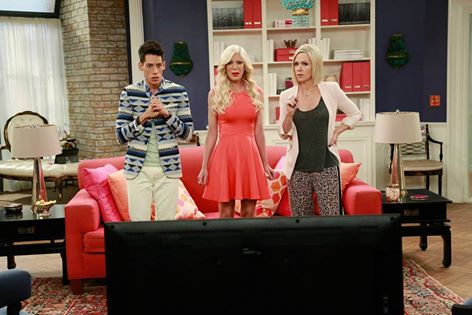 Mystery Girls season 1 is set to wrap up on Wednesday night and fans are wondering whether the series will be renewed or canceled.

ABC Family hasn’t made an announcement yet either way.

But it looks like a cancellation is likely on the way because of very low ratings.

The series started out with 0.75 million viewers overall, including 0.34 million in the key 18-49 demographic.

The series has dipped to about 0.49 million viewers overall, with about half in the key demographic.

Young & Hungry, which leads into Mystery Girls, is averaging 0.85 million overall and 0.38 million in the 18-49 demographic.

Check out a description of the finale below.

In “The Killer Returns,” Nick freaks out when he learns that Zanucci (Anthony Bonaventura), the murderer in the mob hit he witnessed, has struck again. Worried about his safety, Nick must admit that the mobster knows he saw everything and can now find him, thanks to the new Mystery Girls commercial. Holly & Charlie find Zanucci at a local spa and turn him over to the cops, confident that Nick is now safe and Holly can concentrate on her efforts to snag Detective Duane (Ryan McPartlin). B

ut when the detectives return to the office, they discover the case isn’t quite solved and they must act quickly in order to save their loved ones. Meanwhile, when Charlie’s husband Michael (Adam Mayfield) hears she’s hunting a killer, his concern for her safety prompts her to consider a different path.