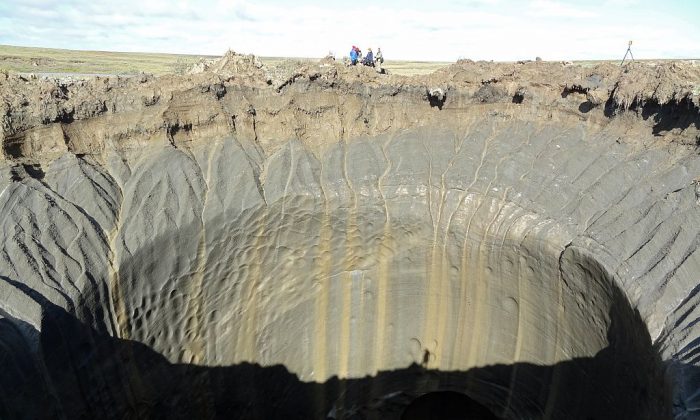 Huge craters are continuing to blow the ground open in Siberia. It isbelieved to be the result of melting permafrost and a changing climate. The craters are massive and are formed by an explosion. They are concentrated in the northern region of Yamal.

The craters are believed to come from methane gas that bubbles up from the ground as the permafrost melts. “The last time we saw a permafrost melting was 130,000 years ago. It’s a natural phenomenon because of changes in the earth’s orbit,” Oxford earth sciences professor Dr. Gideon Henderson said to CNBC.

Though some of the craters found have been massive, scientists still struggle to explain them. The CNBC articles connects the melting permafrost to an overall warming of the region, and to the craters that somehow result as gas awakens in the earth.

The melting permafrost has also been linked to anthrax deaths. The anthrax is believed to have been trapped in the permafrost. Its release into the environment has led to the deaths of reindeer and people in the Yamal region, as the Guardian reports.

Over 7,000 gas filled bulges in the ground have been discovered. They are believed to be filled with gas that causes the sinkhole craters. The Siberian Times reports that this is how the craters are forming.